Prime Minister Prayuth Chan-ocha hit out at anti-coup groups Thursday, saying they have resorted to using black magic against him. 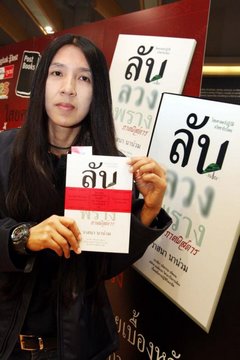 Gen Prayuth was speaking as he chaired a meeting of the 11 screening committees responsible for selecting members of the National Reform Council at the Royal Thai Army Club on Vibhavadi Rangsit Road.

At one point during his speech, Gen Prayuth, who also heads the National Council for Peace and Order (NCPO), told the people in attendance about the effects black magic is having on him.

"Today, we have to help each other. If reforms do not succeed, I don't know what we can do next.

"If you still want to fight on and go underground, bring it on. If you resort to performing [black magic] rituals, just bring it on,'' Gen Prayuth said, referring to anti-coup elements which remain active.

"Today, I have a sore throat, a pain in the neck. Someone said there are some people putting curses on me. I had so much lustral water poured over my head I shivered all over. I'm going to catch a cold now,'' Gen Prayuth said, making light of the black magic he says is being used against him.

"I don't want to make any of you feel stressed," he told the gathering.

The ritual of having lustral water poured over one's head is believed to ward off the effects of black magic.

A source in the cabinet also said Gen Prayuth has instructed cabinet members to dress in either the phra rajathan shirt or the Raj pattern jacket when they attend cabinet meetings instead of Western formal suits.

Privy Council president and former prime minister Prem Tinsulanonda was the first prime minister to introduce and wear the phra rajathan shirt and he stills wears it today. The Raj pattern jacket is still used on special occasions as a national costume. 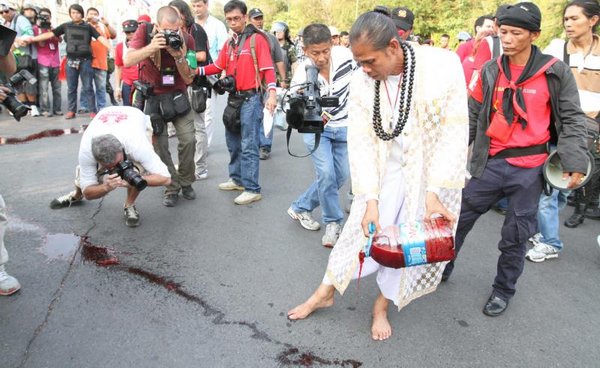 Prime Minister Prayuth could be right that opponents are trying to use black magic rites against him. In this infamous event of 2010, the red shirts dumped blood and performed black magic rites in the front yard of the Democrat Party headquarters. (Photo by Pattanapong Hirunard)