Deputy national police chief Somyot Phumpanmuang yesterday defended police handling of the "men in black" case saying there was solid evidence to back the arrests of the five suspects in connection with the political violence in 2010. 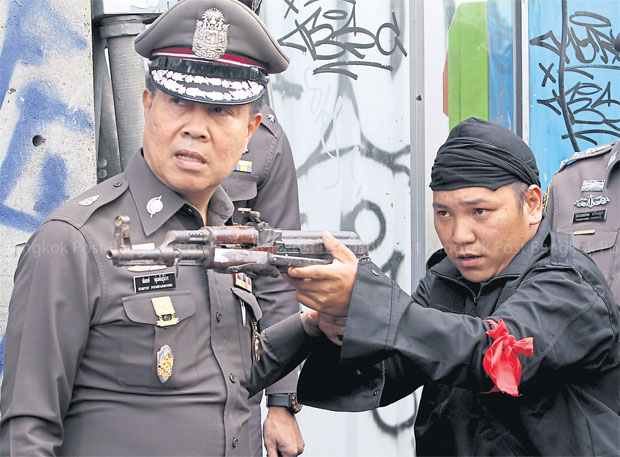 Preecha Yuyen, 24, aims a rifle during a crime re-enactment exercise near Khok Wua intersection. He is one of the five ‘men in black’ suspects arrested earlier this week for alleged involvement in political violence on April 10, 2010. APICHART JINAKUL

Pol Gen Somyot said the arrests were made only after the court had reviewed the evidence against the five people and agreed to issue warrants for them. He said the suspects also admitted they were involved in attacks on the night of April 10, 2010.

The five suspects were detained on Tuesday. They are Kittisak Soomsri, 45, Chamnan Phakeechai, 45, Preecha Yuyen, 24, Ronnarit Suricha, 33, and a 39-year-old woman, Punika Chusri. They were accused of using war weapons during the protests in Bangkok which resulted in the deaths of five soldiers, and 21 others including a foreign journalist during a clash at Khok Wua intersection.

Pol Gen Somyot said the five are not scapegoats and that police are working to find the remaining suspects.

Pol Gen Somyot would not argue with red shirts who insisted there were no "men in black" among their ranks. United Front for Democracy against Dictatorship co-leader Veerakarn Musikapong has questioned if the suspects were really "men in black".

"Police found evidence and presented it to the court. The suspects confessed and explained what they did. This is good enough. I won't argue [about their connections to red shirts]," Pol Gen Somyot said.

All of the suspects except Ms Punika were yesterday brought to Khok Wua intersection for crime re-enactments under tight security. About 350 police were deployed to escort them to the scene.

The suspects allegedly said they received weapons from a house on Ram Intra Road before they went to Ratchadamnoen Avenue where troops were preparing to disperse the crowds.

Mr Kittisak and Mr Preecha were allowed into the protest site after they gave the guards a pass code. Mr Chamnan managed to slip through on his own. Mr Ronnarit was the van driver.

Once they were among the red-shirt protesters, they allegedly opened fire on troops at a checkpoint and gathered at a meeting point where they were picked up by the van.

Pol Gen Somyot said the suspects would be taken to the Criminal Court today where police would seek court permission to hold them longer for questioning.

Meanwhile, Prime Minister Prayuth Chan-ocha said yesterday it is the police's job to prove if the suspects were involved.

"I won't comment on it and create pressure. The wrongdoers will face the consequences for their acts," he said.

Department of Special Investigation chief Chatchawal Suksomjit said the investigation will focus on the roles of the "men in black" in the 2010 violence.

The focus will also be on the death of Gen Romklao Thuwatham at Khok Wua intersection during the clashes between the red shirts and soldiers.

On Thursday, police found a small weapons cache at a house in Wang Muang district of Saraburi. A claymore mine with a detonating cord linked to a mobile phone was found there. A bomb disposal team was called in to destroy the mine.