A pensive Nidhi Eoseewong is taken to Khlong Luang police station after police shut down a political forum at Thammasat University on Thursday (Photo by Pongpat Wongyala).

Prayut Chan-o-cha reminded academics and activists on Friday that he is not an elected prime minister and said he will not allow political forums to derail his reconciliation campaign. 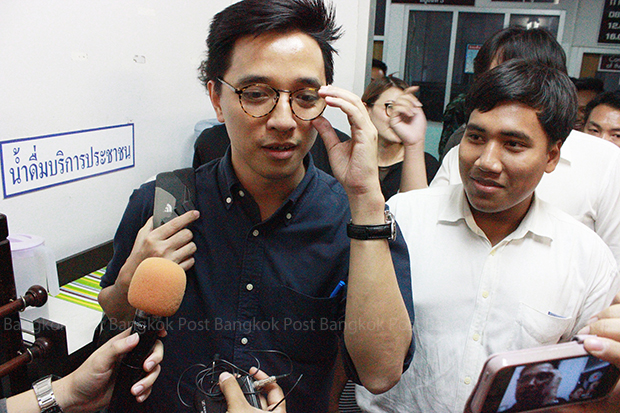 Political scientist Prajak Kongkirati, left, talks to reporters after he, other academics and students were released by Khlong Luang police on Thursday night. (Photo by Pongpat Wongyala)

"Please understand that I don't come from an election. I'm well aware of that. So please put on hold all political criticism and forums on politics," said the prime minister, who came to administrative power through a military coup on May 22.

Gen Prayut said he did not want his plans to restore unity set back by critics, and accused the organisers of a forum at Thammasat University on Thursday of intentionally ignoring martial law, which bans political gatherings of more than five people.

The coup leader stressed that martial law is still in force.

''They knew it. They had been invited in several times to be asked for their cooperation in refraining from speaking out at this time, because the country is moving forward. We are in the process of introducing reforms and building reconciliation.

"They held their forum without seeking permission," he added.

The prime minister said forums were allowed, on the condition that organisers send an outline to authorities for approval first. Topics for discussion must not be democracy, elections or criticism of the government.

While admitting he had obtained office by having seized power, Gen Prayut defended his position.

"Have I done anything to damage the country since I took power?" he said before walking away from reporters at Government House.

His stern remarks followed a ban on a student-organised forum, "Democracy Classroom: Chapter 2 - The Decline of Dictatorships in Foreign Countries", at Thammasat University's Rangsit campus on Thursday.

Police broke up the talks and took four speakers, including well-known social critic Nidhi Eoseewong, to Khlong Luang police station before releasing them on Thursday night.

The other three were political science lecturers Janjira Sombatpoonsiri and Prajak Kongkirati and liberal arts lecturer Chaowarit Chaosangra. Three students who organised the forum and are members of the League of Liberal Thammasat for Democracy were also escorted to the police station.

About 30 Thammasat students followed them to the station and waited outside until all were freed.

Soldiers joined police in talks with them at the police station.

Authorities did not press charges of defying martial law. They said they were whisked off to the station for a session on an ''attitude adjustment".

Pol Maj Gen Samit Mukdasanit, chief of Pathum Thani police, said authorities had told the lecturers and students that they were required to inform authorities in advance about all activities to be held on the campus.

After their release on Thursday, Mr Prajak admitted there were differences between the speakers and organisers, and the authorities, over the banned forum. It was planned to compare the political systems of other countries, and had nothing to do with Thailand, he claimed.

''The lecturers and students are still of the view that it is an issue of academic freedom. The activity that was held was purely academic," Thai Rath Online quoted him as saying.

Mr Nidhi attended another forum discussing the southernmost region's problems at Thammasat's Tha Phrachan campus on Friday. He said he opposed the ban on the seminar on Thursday, according to Mathchon Online. Authorities should allow space for academic freedom, he added.