The revival of Phuket
Thailand
Politics

The revival of Phuket

Perhaps more than any other province, Phuket has lived in fear of mafia-style gangs preying on tourists and business operators for several decades. 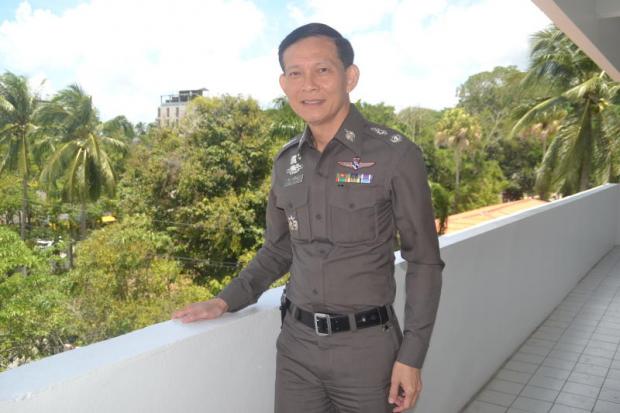 Pol Maj Gen Paween Pongsirin, commander of the general staff division at Provincial Police Region 8, is an architect of the 'Phuket model'.

But since the coup of May 22, the influence of these gangs has been severely eroded after the junta launched a massive blitz to wipe them out. Little by little, hope is returning to the province of having a fair and equitable society.

The gangs' tentacles stretched into every conceivable part of Phuket society — notably public transport services and local politics. Combined task forces of police and soldiers, however, have eaten into the mafia ranks.

A key man behind the operations to create the so-called "Phuket model" — or crime eradication projects — is Pol Maj Gen Paween Pongsirin, commander of the general staff division at Provincial Police Region 8.

Pol Maj Gen Paween has set up a team to closely monitor activities of individuals and gangs suspected of running or being complicit in the tourist scams and criminal activities on the resort island, particularly the non-registered and black licence plate taxis which are known for for violence.

The Phuket Model is a special task of police and security authorities assigned by the National Council for Peace and Order to suppress crime and mafia influence in the province. It specifically singles out the gangs which prey on tourism businesses and tourists while also bringing order through tough regulations and enforcement of the law.

The model, implemented since the May 22 coup, has seen local politicians who pull the strings in Phuket society or receive ill-gotten gains from the gangs being charged by police. Criminal operations thought to be connected to the gangs include the running of illegal taxis and the setting up of vendor stalls on public property.

Traders encroaching on Phuket's famous beaches such as Bang Thao, Surin, Nai Thon, Kamala, Patong, Karon, Naihan, Rawai, Naiyang and Mai Khao were among the most urgent of problems to deal with.

Officials agreed there must be ample space for the public at beaches and so the people running businesses needed to be removed.

Local administration organisations have also told traders to remove buildings, shops and stalls encroaching on beaches and are taking legal action against the owners.

The Phuket Model, which also incorporates clean environments and orderly behaviour, is to be launched in other tourism provinces.

Another major problem was the conduct of some taxi drivers. The gang-affiliated drivers had caused great damage to Phuket's tourism image and were likely responsible for driving away tourists.

Pol Maj Gen Paween admitted he had reservations about being assigned to crack down on the island's mafia gangs. He once served as a police commander in the province and was well aware of their influence.

He moved in swiftly to get information from senior officers at several police stations, but quickly came up against a serious stumbling block in the shape of inadequate police knowledge of the extent of the mafia gang problem.

Pol Maj Gen Paween said he wanted Provincial Police Region 8, which has jurisdiction over Phuket, to pull in resources from other provinces to work with him in tackling the rising crime rate in the island province. This led to the formation of a 14-member special police investigative team.

The team was divided into small groups with responsibility for gathering field evidence and handling the investigative work.

The team, which is the main enforcer for the Phuket Model, faced several obstacles as it gathered evidence as local residents were reluctant to cooperate following the arrest of two drivers of black plate taxis.

The arrests were made during the crackdown jointly launched the Department of Special Investigation and other relevant agencies, including the Tourism and Sports Ministry, last year.

Investigators focused on the damaged parties, among them foreign tourists and tourism-related businesses such as travel agencies, spa therapists and souvenir shops in Phuket.

Initially, some business operators feared giving information to the authorities for fear of reprisals from the mafia rackets. Some were uncertain about whether the police team could bring the mafia figures to task, Pol Maj Gen Paween said.

More than 50 companies heavily criticised the local police for failing to tackle the mafia gangs which thrived on extortion and protection rackets.

But he gave an assurance to the businesses and their staff about safety measures, finally convincing some of them to cooperate with the authorities.

Among the heavy-handed methods used by the gangs were standover tactics involving tour guides who would be beaten for failing to pay protection money. The guides had no choice but to pay 400-1,000 baht a month to the mafia figures.

Meanwhile, travel agencies were paying off local politicians behind the mafia gangs so they could continue business "without a hitch". They had to pay 30,000 baht a month each during the peak tourism season and 20,000 baht a month during other times of the year.

Other taxi gangs set up shop outside major hotels where they forced guests to use their services. The gangs demand the hotels supply only gang-run taxis to their guests.

The gangs threatened to close hotels, roads and even police stations when they became "dissatisfied", according to Pol Maj Gen Paween.

If a gang member was caught, the gang would block main roads to demand the immediate transfer of the police station head involved, Pol Maj Gen Paween added.

Their tactics worked and the number of illegal taxi queues increased to almost 300 with some 4,000 affiliated vehicles, many of them "black plate" taxis, plying Phuket roads.

During down times, many drivers were caught gambling at their taxi shacks but showed no fear of the police.

Meanwhile, warrants were issued for the arrest of executives of Karon municipality who run the gangs. They are among the local administrators who were twisting the arm of the law.

The police team was also starting to regulate public beaches to allow operators who run honest businesses or services to work free from the threats of mafia figures.

Mafia suppression on the resort island is proving to be a success so far, a credit to Pol Maj Gen Paween, a graduate of the Police Cadet Academy's Class 35.

Earlier, he was the commander of several jurisdictions in the South. He played a key role in helping people affected by the tsunami in 2004 and handled many high-profile criminal cases, including the arrest of a murderer in the killing of a female Swedish tourist at Mai Khao beach in Phuket, the arrest of a former Patong mayor for masterminding a murder and forest encroachment in Phuket.

He also took part in the police force deployed to keep peace during the mass protests in Bangkok.

The son of an orchard farmer, he said he took up police work as a career on the advice of close relatives. There is also an important piece of advice from Prince Mahidol of Songkhla that he adheres to: That people with authority should put the people's interest before their own. 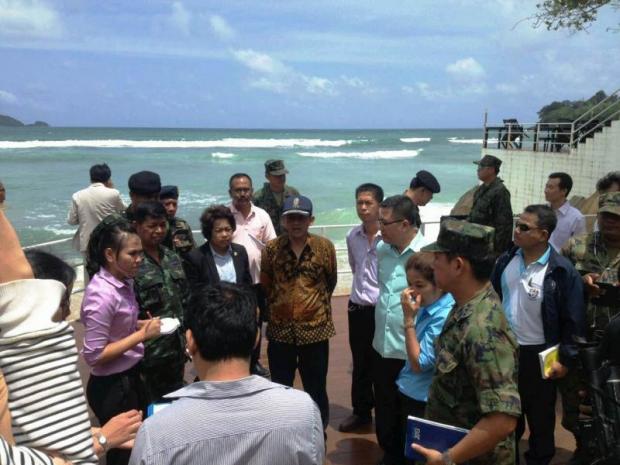 State authorities brief reporters about their operations at Patong beach. 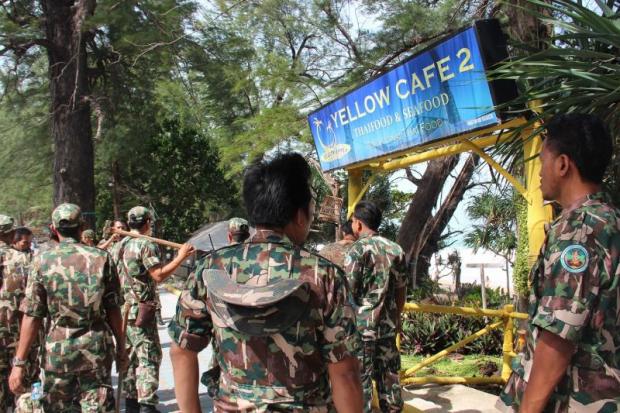 Soldiers with tools are deployed to clear the beaches and return the space to the public. 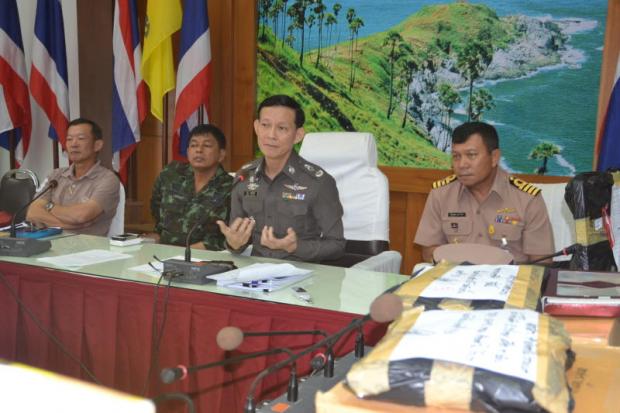 Pol Maj Gen Paween holds a press conference on the progress of the campaign against crime and mafia influence on the resort island. 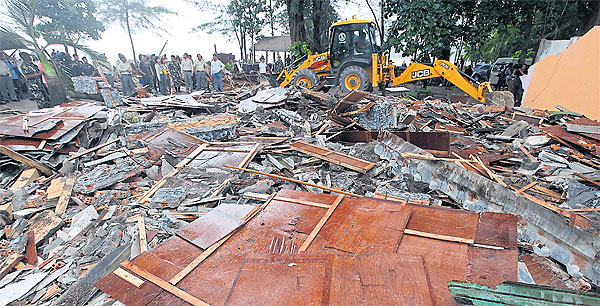 Authorities use an excavator to demolish make-shift illegal structures on Nai Thon beach which is part of Hua Laem National Park in Thalang district. Pattanapong Hirunard