A former MP has filed a lese majeste complaint against Thaksin Shinawatra and two other people, as well as Matichon Plc, in connection with a translated book. 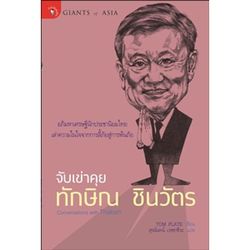 'Jub Khao Kui Thaksin Shinawatra' has been available in the local market for more than two years.

Mr Watchara claimed some parts of the book contained material harmful to the royal institution and had been quoted worldwide.

Mr Plate, an American journalist, wrote the 256-page book titled Conversations with Thaksin: From Exile to Deliverance: Thailand's Populist Tycoon Tells His Story based on his interview with Thaksin.

Part of the Giants of Asia series, the book was published on Sept 7, 2011 by Marshall Cavendish International (Asia) Pte Ltd.

Mr Suranand, a former secretary-general to ex-premier Yingluck Shinawatra, Thaksin's sister, translated the book into Thai. It was first published by Matichon in March 2012 and reprinted in February this year.