Prime Minister Prayut Chan-o-cha on Friday urged critics not to jump to the wrong conclusions about rich officials and promised to disclose the assets of all cabinet ministers. 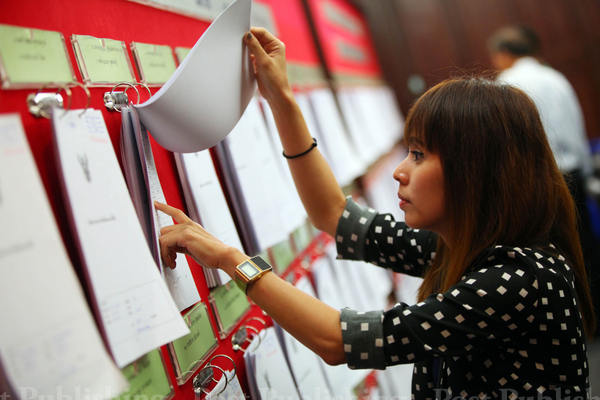 A reporter examines details of declarations by National Legislative Assembly members whose assets were made public by the National Anti-Corruption Commission on Oct 3. (Post Today photo)

The wealth of civil servants — including military officers — should not be judged based simply on salary as some could have assets inherited by their families or those of their spouses, he said.

All civil servants and soldiers were not necessarily poor, he said on his weekly Returning Happiness to the Thai People TV programme.

Eyebrows were raised recently when the National Anti-Corruption Commission (NACC) released the asset declarations of 195 National Legislative Assembly (NLA) members. Several active and retired police and military officers were worth more than 100 million baht each. Some of them were among 28 NLA members who had lost a court challenge against disclosure.

Gen Prayut's mention of military officers was seen as a reference to the controversy surrounding his younger brother Preecha, the assistant army chief.

Gen Preecha and his wife were shown to have 42 million baht in bank accounts and an additional 9.1 million baht worth of land.

Gen Preecha said he was targeted because of his relationship with the prime minister. He also pointed out that his declaration included large bank accounts of the 3rd Army that he held when he served as its commander. The money was not his, he said.

Gen Prayut, meanwhile, said the public should not automatically suspect that officials became rich due to corruption.

"I ask you to be open-minded and not to judge people based on your own perceptions," he said. "It may be because [an official] was born in a wealthy family, not because he became rich through acts of corruption.

"I think it would be unfair if we judge the book by its cover."

Gen Prayut and his cabinet members are next in line to declare their wealth to the NACC, which will later made it to the public.

"Today all cabinet members are ready to declare their financial assets. Every minister will come clean as they are open to inspection," he said.

Gen Prayut also used his address to discuss his government's plans for improving the economy, with a major focus on improving infrastructure to slash logistics costs and turn Thailand into a transport hub of Southeast Asia. The centrepiece will be the development of dual-track railways in hopes that the hapless State Railway of Thailand can improve its fortunes.

The government plans to invest 2.4 trillion baht in infrastructure including double tracks, two routes linked to neighbouring countries and onward to China, as well as mass-transit routes. They will be constructed in phases over eight years but the exact timeline has not been announced.

Deputy Prime Minister Pridiyathorn Devakula is working on the details and they should be completed by December, the premier said.

"We will know precisely then (before the end of this year) the details and locations of these infrastructure projects," he said.

Gen Prayut made clear that high-speed trains were not on the agenda, at least for now, as they required massive financial resources that should be channeled to help the poor first.

"The high-speed train projects will have to wait," he said.

The previous government had made high-speed passenger rail a highlight of its infrastructure plan. It wanted to build four lines but independent economists said they would never be financially viable without massive fare subsidies.

MR Pridiyathorn told the Bangkok Post Forum on Wednesday that improving the rail system was essential for Thailand to achieve its goal of being a trading centre in the region.