PM has a vision: Developed country status by 2025
Thailand
Politics

PM has a vision: Developed country status by 2025

Prime Minister Prayut Chan-o-cha has outlined a bold new vision to turn Thailand into a developed country by 2025. 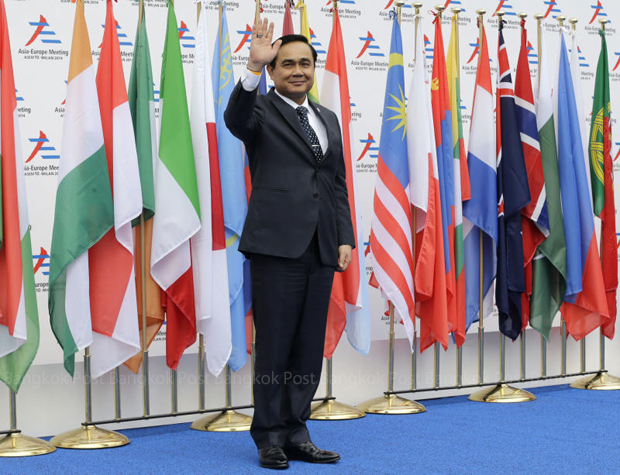 Gen Prayut Chan-o-cha waves as he arrives for the 10th Asia-Europe Meeting in Milan on Thursday. The prime minister recorded his weekly speech for release on Friday before he left for the summit in the Italian city. (AP photo)

Speaking on his weekly "Returning Happiness to the People" broadcast, he said the country needed a vision of what it could achieve in the long term.

"I think all Thais need to find common ground. Both the government and the NCPO (National Council for Peace and Order) have already come up with a vision which is 'Thailand Forward 2025', with an aim of turning Thailand into a developed country by the year 2025," he said.

"However, 'Thailand Forward 2025' might be just a temporary name. We might come up with another name that best suits the country."

Gen Prayut recorded his speech before leaving for Milan to attend the Asia-Europe Meeting in the northern Italian city. He will return to Thailand on Saturday.

Details of the 'Thailand Forward' vision have yet to be thrashed out. But the scope of the proposal suggests that Gen Prayut is determined to leave a lasting mark on the country.

Two months after taking power in a coup in May, the general introduced "12 core values" for citizens to follow. They include having love for the monarchy, nation and religion; being honest, patient and good toward the public; showing gratitude to parents, guardians and teachers; persevering in learning; having strength against greed and putting concern about the public and national good above self-interest.

The values also stress that Thais should conserve Thai culture; be moral and share with others; show discipline and respect for the law and elders; live by His Majesty's sufficiency economy philosophy and understand that democracy functions with the monarch as the head of state.

The Education Ministry has snapped them up and taken them to all schools for students to remember.

Malaysia has been pursuing Vision 2020 set out by Mahathir Mohamad in 1991 when he was prime minister. Its main aim is to make Malaysia a developed country by 2020.

Gen Prayut also used his address on Friday to urge the public and private sectors to restore confidence among tourists and woo them to the country with better safety measures and facilities for visitors.

The tourism sector has been hard hit by the political unrest late last year, followed by the enforcement of martial law and the coup. The murders of two British tourists last month and subsequent negative publicity about the police investigation have further weakened confidence.

The slump on foreign visitors forced the government to scale down its forecast this year to 26 million, a drop of 700,000 from last year, and to hope that business will bounce back next year.

International arrivals of all kinds, including tourists, dropped 5.6% to 51.2 million in the 12 months to Sept 30, at the six international airports, including Suvarnabhumi, run by Airports of Thailand Plc.

"We are renowned for being the Land of Smiles not the land of conflicts because of the outstanding qualities of the Thai people," Gen Prayut said.

"We have to be extra careful in order to prevent politically motivated conflicts and violence from recurring," he said.

The government is now banking on domestic travel to bolster the industry by approving tax incentives for those holding seminars in the country until the end of next year.

The main issue worrying foreign tourists is martial law which bars them from obtaining travel insurance while travelling to Thailand.

The NCPO has set aside a budget of 200 million baht for travel insurance for tourists coming to the kingdom.

But Gen Prayut said that was not sufficient as all Thais need to join hands to help the country recover its position as a favourite destination for tourists.

"The government needs help from all sectors in regaining foreigners' confidence," he said.