Here to observe, not investigate

Prime Minister Prayut Chan-o-cha has denied media reports that he will allow British police to participate in the investigation into the murder of two UK tourists on Koh Tao last month.

Speaking at Suvarnabhumi airport after returning from the 10th Asia-Europe Meeting (Asem) in Milan, Gen Prayut said the British government will send a team of observers to follow progress in the investigation into the murders.

Media including the BBC and the Telegraph reported on Saturday that British investigators will arrive in Thailand to help with the case after Gen Prayut met Prime Minister David Cameron at the Asem summit.

The reports said the agreement was made after Mr Cameron managed to persuade Gen Prayut to allow British police to help with the investigation.

The reports also said British police will look into two areas of concern.

Myanmar migrant workers Zaw Lin and Win Zaw Htun were charged with the murder of David Miller, 24, and the rape and murder of Hannah Witheridge, 23, after their bodies were found on Koh Tao on Sept 15.

Thai police have said the two suspects confessed to the crime and their DNA matched samples taken from Witheridge's body, but there have been accusations that the men were tortured — something Thailand strongly denies. 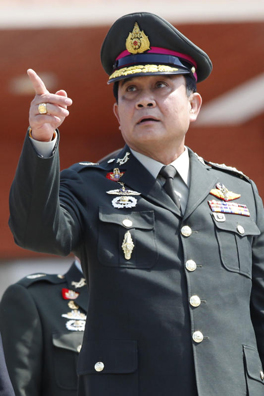 Gen Prayut said on Saturday he discussed the murder case with Mr Cameron during the Asem meeting.

"I sat near the British Prime Minister. He asked me to take care of the Koh Tao case. I answered his questions and he was satisfied," he said.

He added that Thai authorities have answered all the questions raised by media and concerned parties over the investigation.

According to Gen Prayut, Mr Cameron told him that his government had no problem with the Thai judicial process, although British people who follow media reports had questions.

"They will send observers. Currently, there are also some observers from the British embassy," Gen Prayut said.

Gen Prayut also countered reports and photos of protests against him while he attended the Asem meeting in Milan. He said he did not see any protests at the meeting.

"Such pictures could be taken anywhere and posted [on social media]. I don't know where the protests took place, but I didn't see them. They might have held up the placards outside their houses and taken photos," he said.

Deputy Prime Minister Prawit Wongsuwon, who is in charge of national security, also confirmed that British police will come only as observers and "they will not get involved in the investigation".

He said that although such a petition is allowed under British law, it will not affect the investigation by Thai police as the judicial processes of the two countries are entirely independent of each other.

The petition, launched on Oct 4 on Change.org, passed the 100,000 signature mark on Friday. British law stipulates that an e-petition with at least 100,000 signatures can be debated in the House of Commons.

Nakhon Chompuchart, a human rights lawyer from the Lawyers Council of Thailand, said the council is expected tomorrow to appoint him as an adviser to a team representing the two suspects.

He said he will visit the suspects at the Koh Samui prison.

Although they have reportedly confessed to the crime, they had the right to retract the statements when they go to court, Mr Nakhon said.