The Pheu Thai Party and its red-shirt allies have affirmed they will not proceed with provocative action against the government. 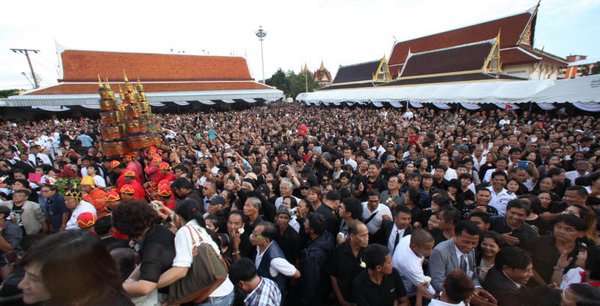 Party secretary-general Phumtham Wechayachai said Pheu Thai will adopt a "wait and see" approach and give the government the opportunity to carry out reform.

"We will make a decision on what to do after we see how the reforms go," Mr Phumtham said.

He said the appropriate way is to create unity and reconciliation in the country.

Mr Phumtham said he does not believe the changes will be designed to force Pheu Thai and Thaksin out of politics.

Pheu Thai executives and red-shirt United Front for Democracy against Dictatorship (UDD) leaders joined hundreds of supporters, particularly from the North and Northeast, for the cremation for Col Apiwan, also a former red-shirt core member.

Nonthaburi police provided security and oversaw traffic, as long lines of vehicles snaked along the routes leading to the temple.

Intelligence officers were reported to have mingled among the crowd to keep an eye on the ceremony.

As Ms Yingluck was on her way back, the crowds applauded the former premier to show their support.

This was despite the master of the ceremony pleading to guests to keep calm, in honour of the deceased.

"We are not planning movements against the government to the extent that Col Apiwan's cremation serves as a venue to hatch plots, as the National Council for Peace and Order (NCPO) might think,'' Mr Siriwat said.

"The red shirts understand the time is not right to stage a move."

The NCPO and the government have set early 2016 for the next election.

The red shirts have agreed to let them work and will keep an eye on them, he said.