NACC: Reform body does not need to declare assets

Members of the National Reform Council do not need to declare their assets, the National Anti-Corruption Commission ruled on Tuesday. 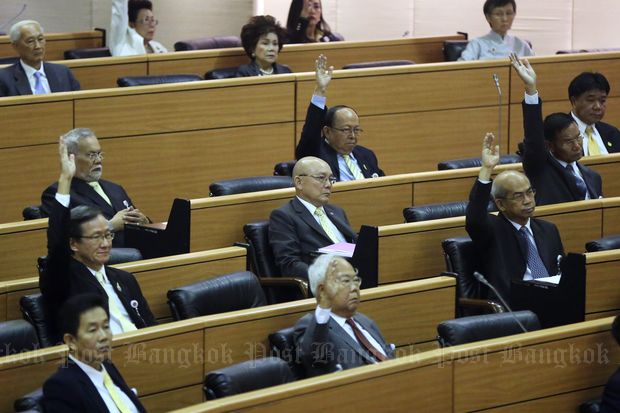 The National Reform Council convenes for the first time on Tuesday. (Photo by Seksan Rojjanametakun)

The anti-graft body reasoned the members simply do their academic job by sharing their knowledge, said Vicha Mahakun, an NACC member, adding they do not have conflicts of interest.

As a special body, it remained unclear earlier whether the NRC would have to declare their assets like members of the National Legislative Assembly (NLA) did.

Deputy Prime Minister Wissanu Krea-ngam said on Monday the NACC had the power to order the NRC to declare assets, which could then be made public or not depending on its discretion.

Mr Wissanu said he personally thought the NRC members' asset lists should not made public.

Unlike the NLA members, the role of the NRC members is similar to that of vice ministers, who are required to declare assets only when complaints are filed.

The NACC also on Tuesday dismissed a case in which former prime minister Yingluck Shinawatra was accused of illegitimately approved aid to help rubber farmers.

TARO, Japan: The Japanese town of Taro had sea walls that were supposed to be able to survive almost anything the ocean could offer up, but the 2011 tsunami still brought utter destruction.

Thailand may lose its reputation as a regional aviation hub if the government cannot speed up reopening the country to tourism and strengthen the competitiveness of airlines, according to Thai AirAsia (TAA).