Lese majeste charge 'out of context'

Two student thespians formally charged Monday with lese majeste said they won’t enter a plea until December, but feel the play that sits at the heart of their alleged crime is being taken out of context. 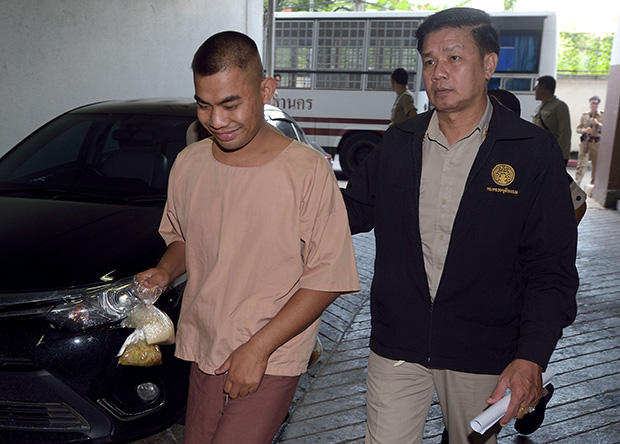 Thai university student Patiwat Saraiyaem (left) is escorted by prison officials as he arrives at the criminal court in Bangkok Oct 27. Two Thais held for more than 70 days have been formally charged with defaming the monarchy in a play performed last year, their lawyer said, as concern ratchets up over the number of lese majeste cases since a May coup. (AFP photo)

The Ratachada Court read indictments against Patiwat Saraiyaem, 23, and Pornthip Mankong, 26, today - more than 70 days after they were detained. The next court date, at which they will enter pleas, is scheduled for Dec 29.

Each is charged with one count of lese majeste linked to an October 2013 performance of fictional drama "The Wolf Bridge" at a commemoration of the 37th and 40th anniversaries of the Oct 6, 1976 and Oct 14, 1973 pro-democracy student uprisings at Thammasat University.

Mr Patiwat, a final-year student at Khon Kaen University, acted in the piece - which was about a fictional monarchy - while Mr Porntip co-ordinated the production and played a small role.

In the eight-page indictment, prosecutors cited nine passages from the pay's scripts they claim insulted the monarchy in violation of the Article 112 of the Penal Code.

Pawinee Chumsri, the lawyer for the pair, was preparing a sixth bail request for. Mr Patiwat was arrested on Aug 13, two days before Mr Porntip. The two never has been granted bail.

The play about a fictional monarch was organized by former members of the now-defunct Prakai Fai Karn Lakorn. Right after the May 22 coup, several members of the troupe were summoned to report at the National Council for Peace and Order, but not the two dramatists.

Mr Patiwat told the Bangkok Post he would read the indictment carefully again and consult with lawyers as to how to plead.

"But my first impression," he said, "is that one should not slice the play into pieces of scrips and consider only certain paragraphs as insulting to the monarchy. They should look at the big picture and that this is a fictional play."

Besides the two already in jail, two red-shirt activists, Watt Wallayangoon and Jaran Ditapichai, also face arrest on lese majeste charges for their roles in the play event.

"It was a modern play that came from several workshops, so there was no script for me to review," Mr Jaran told AFP from Paris, where he is seeking political asylum.

Jaran fled Thailand after he was summoned by the military junta in the days after May's coup. "When you are charged with lese majeste you can't go back (to Thailand)," he added.