In a meeting at the Association of Southeast Asian Nations summit in the Myanmar capital of Nay Pyi Taw on Wednesday night, Gen Prayut explained his reasons for seizing power in May's military coup, saying it was done to ensure public safety because internal conflicts had led to the use of military-grade weapons and violence had been escalating, government spokesman Yongyuth Mayalarp said. 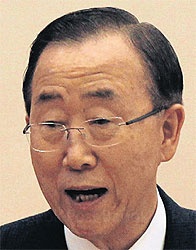 The UN said in a statement that Mr Ban "acknowledged the prime minister's point that Thailand had returned to stability", but expressed concern at the continuation of martial law.

Mr Yongyuth quoted Gen Prayut as telling the UN chief that his government intended to restore order, peace and public safety in the country and was using normal administrative regulations and reforming the country and its democracy.

Meanwhile, Japanese Prime Minister Shinzo Abe called on Gen Prayut to restore a civilian-led government during the meeting on Thursday as he expressed Tokyo's interest in more infrastructure projects in Thailand such as a high-speed train system, Kyodo News Agency reported.

Gen Prayut explained his government's efforts to return to a civilian-led government and told Mr Abe that Thailand looks forward to further economic cooperation with Japan.