It's lonelyat the top
Thailand
Politics

Abhisit is under pressure, and Sukhumbhand is among those tipped to replace him - Gen Prayut hints at using his ultimate power under Section 44 - Among the many once tipped to be post-coup PM, one stands out for his disinclination

Bangkok governor Sukhumbhand Paribatra has been back in office barely two months since being cleared by the Appeal Court in an election-related trial and already his qualifications as a possible future Democrat Party leader are being considered.

MR Sukhumbhand was suspended after the Election Commission voted 3-2 in March to disqualify him after he won the Bangkok governor election, citing violations of election law. Since MR Sukhumbhand's victory had been endorsed by the EC, a court order was sought to nullify the election and call a re-run.

The Appeal Court in early September announced its ruling to dismiss the allegations against the governor. 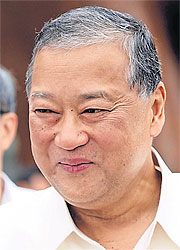 Sukhumbhand: Back from the shadows

The case was based on allegations that former Democrat MP Suthep Thaugsuban — who supported MR Sukhumbhand's election campaign — defamed Pheu Thai Party candidate Pol Gen Pongsapat Pongcharoen, thus influencing the decision of voters in the 2013 governor election. The Appeal Court, however, ruled that Mr Suthep did not intend to slander Pol Gen Pongsapat.

Now that MR Sukhumbhand is back at work as governor, speculation is circulating among members of the Democrat Party, to which he belongs, that he might have a shot at the Democrat leadership in the not too distant future.

The speculation comes hot on the heels of rumours that the Democrats might soon contemplate a change at the top.

According to a source in the party, certain groups feel the time must come soon when they will need to start looking for a successor to the incumbent leader and former premier Abhisit Vejjajiva, who has led the nation's oldest party since 2005.

There has been talk of former finance minister Korn Chatikavanij, a party deputy leader, possibly taking the helm.

However, several movers and shakers concede they cannot imagine Mr Korn replacing Mr Abhisit anytime soon as he must work a lot harder to win the confidence of party members.

They indicated they would rather see Mr Abhisit remain as party boss than elect Mr Korn as leader.

In the meantime, some Democrats reckon the possibility of MR Sukhumbhand occupying the party leader's chair should not be ruled out.

City Hall was consistently responsive to requests for assistance by the People's Democratic Reform Committee (PDRC) during its six months of street protests against the Yingluck Shinawatra administration in Bangkok. The protesters needed basic utilities at their gatherings such as mobile toilets, which were supplied by City Hall, one of the very few agencies which provided any help.

The PDRC was also led by former Democrat heavyweights, including the movement's secretary-general Suthep, who has now been ordained as a monk.

The ties between the party and the protest group still run deep and they can be factored in whenever the candidacy for a new Democrat leader is taken up for consideration, some observers say.

The Democrat source said many PDRC core leaders were impressed with the help they received from City Hall.

But critics argue that any notion of MR Sukhumbhand looming large as a potential candidate for Democrat leader may be excessively optimistic. If the previous Bangkok governor poll is any indication, his win over Pol Gen Pongsapat was narrow, despite having raked in well over a million votes.

The 'big stick' is threatened

Political observers can't help but wonder what the authorities might have detected on their "radar" recently that prompted Prime Minister Prayut Chan-o-cha to mention Section 44 of the interim charter.

That section gives the National Council for Peace and Order (NCPO) chairman — Gen Prayut, in fact — power over the government, the legislature and even the judiciary to intervene and neutralise threats to national reforms, public peace and order, national security, the monarchy and the economy. 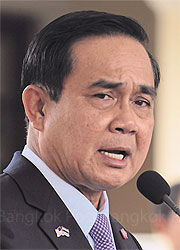 It is the first time Section 44 has been brought up since the provisional constitution was put in place.

Thaworn Senneam, a former Democrat MP and a core leader of the PDRC, did not like the idea of the National Legislative Assembly (NLA) rejecting the hearing for an impeachment motion against former House speaker Somsak Kiatsuranon and former Senate speaker Nikom Wairatpanij. Based on his remarks, another round of street protests might take place if that was the case.

In response to Mr Thaworn, former Pheu Thai MP Worachai Hema pledged to mobilise supporters if the assembly proceeded with the impeachment process against the pair for their role in the proposed amendments to the 2007 constitution.

Even though the political scene has been quiet over the past five months since the coup due to the enforcement of martial law, it would be naive to assume that there are no activities going on against the interim government and the coup-makers, domestic or foreign.

Social media remains their most effective tool in rallying people against the military junta, according to observers.

Hundreds of protesters gathered to greet Gen Prayut after he arrived to attend the 10th Asia-Europe Meeting in Milan, Italy, last month. It was the first anti-coup protest overseas. That was followed by an anti-coup demonstration outside London's Odeon Cinema in Leicester Square on Monday where The Hunger Games: Mockingjay Part 1 was premiered.

Anti-coup activists have set up a Facebook page and a Twitter account to communicate among themselves and with the public. It will be interesting to see how local activists will react when the film first appears in local cinemas next Thursday. The movie's famous three-finger salute has been used as a symbol of defiance against the coup and has been banned by the military.

Anchalee Paireerak, a core PDRC member, recently warned on Facebook that the military is gearing up to summon leaders of political groups and members of the media who are threatening to disrupt the government's and the NCPO's work.

Her message has drawn a quick denial from the military.

A source close to Gen Prayut defends Section 44 as a necessary tool to keep the interim government focused on its work which ranges from improving the economy, stamping out corruption and bridging the political divide.

According to the source, it is possible that the military will eventually have to flex its muscles again and remind the leaders of political groups, especially those affiliated with the red shirts, to toe the line.

As for the media outlets that seem to enjoy driving in wedges and stoking divisiveness, measures are being considered in order to tame them.

When legal experts conjured up the idea of amending the charter to allow a non-elected individual to be nominated for the premiership, few names popped out of the hat. Not that that surprised many.

After the National Council for Peace and Order toppled the Yingluck Shinawatra government on May 22 and the dust from the political commotion of the months-long street protests had begun to settle, public attention was focused on who would be the next prime minister.

While the name of NCPO chief Prayut Chan-o-cha had been at the forefront of speculation, some others also emerged as possible candidates for prime minister. 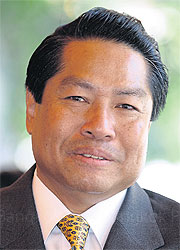 Palakorn: Happy to be a privy councillor

Former defence minister Prawit Wongsuwon had been a favourite, putting him in direct competition with another promising name — that of Palakorn Suwannarat, the privy councillor.

Mr Palakorn was thought to have been in the running because another privy councillor, Surayud Chulanont, quit the council to take up the post of prime minister following the Sept 19, 2006 coup which ousted Thaksin Shinawatra, Ms Yingluck's elder brother.

Some observers believed that history could repeat itself or even that a precedent could be set where someone from the privy council could "cross over" and lead the country.

Around the time of the May 22 coup, rumours circulated that Mr Palakorn was closely connected with Gen Prayut and that the two men were said to have met over a meal at a hotel in Bangkok during the protracted protests by the People's Democratic Reform Committee.

However, Mr Palakorn denied having met Gen Prayut in person before or just after the coup.

In addition, Mr Palakorn has a clean image and works closely with Her Majesty the Queen on various royally initiated developmental projects.

Mr Palakorn insisted he has no political ambitions. Being a privy councillor was the highest honour he could hope for.

He said no one should have jumped to conclusions by suggesting he planned to follow in the footsteps of Gen Surayud — who has since his time as prime minister returned to the privy council — and prepared himself to be prime minister.

He made it clear that leaving the council never crossed his mind. "We're different, Gen Surayud and I," he said.

But his response did not stop speculation that Mr Palakorn would be nominated as prime minister in the future, if and when the constitution is rewritten to permit a non-elected person to take the post.

Mr Palakorn admitted it was flattering that some people thought he had what it takes to be the country's leader.

As a political science graduate, he recognises that under democratic principles, a prime minister must be elected.

Exceptions can be made in certain certain circumstances such as when the House of Representatives votes to select an outsider to be prime minister to tackle specific national problems. "That's an acceptable scenario," he said.

"The views I hold may differ from those of other people. But I'm most proud to have been a privy councillor for 13 years and I have never aspired to become prime minister," he said.