The organisers of a banned forum hold a rally in front of the Oct 14, 1976, Memorial with police behind them.

The organisers of a concert and talk show on social issues were "invited" to be questioned about their attitude by police officers and soldiers on Sunday shortly after staging a rally over the media policies of the National Council for Peace and Order (NCPO). 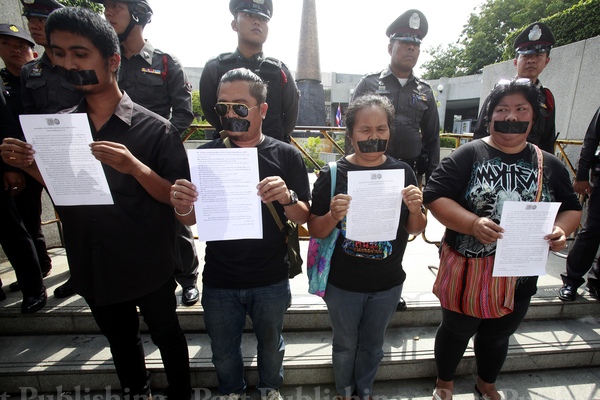 Police stand guard at a rally in front of the Oct 14, 1976 Memorial on Sunday. The protesters released an open letter against the NCPO's meeting ban. (Photo by Thanarak Khoonton)

Five protesters, led by former student leader Nitirat Supsomboon - all wearing black - grouped in front of the Oct 14, 1973 Memorial on Ratchadamneon Avenue with black tape sealing their mouths to send a message of their opposition to the ban on the "Our Plot - Whose Land?" forum.

Mr Nitirat left a space between himself and the four other demonstrators to avoid the martial law prohibition on political gatherings of five people or more. Some supporters in black joined them.

They issued an open letter opposing interference on freedom of expression and vowed not to give up attempts to hold future activities to raise public awareness of the problems the country is facing. Police and soldiers at the Oct 14, 1976 Memorial on Sunday to block a protest. (Photo by Thanarak Khoonton)

The group had planned to hold a forum to address problems concerning land and community issues at Alliance Francaise on Sunday. The speakers included social critic Sulak Sivaraksa, economist Phasuk Phongpaichit, Tul Waitoonkiat, leader of the Apartment Khun Pa pop band, Prayong Doklamyai, an adviser to the Northern Farmers Federation, and Prue Odochao, a pakakayor minority group member in Chiang Mai who has been campaigning for a people's version of the community forest bill.

They had asked permission for the meeting from the First Cavalry Squadron, King's Guard, which rejected it, reportedly because the army was concerned about some of the speakers.

Pol Lt Col Udom Raksatap, a deputy superintendent of Chana Songkram police station, dispatched about 10 police to join five soldiers blocking the rally by sealing all entrances to the memorial.

The protesters were undeterred and changed their plan by rallying outside the venue for 30 minutes before being taken to the police station.

They were at the station to have "their attitudes adjusted", according to a police officer. All were later released without being charged.

NCPO spokesman Col Winthai Suwaree said the ''invitation'' to go to the police station was carried out in accordance with the operational procedures between soldiers and police. They were there to fine tune their understanding about the right channels for suggestions on reform through the National Reform Council, the spokesman said.

Mr Nitirat said the group had no intention of challenging martial law by holding a gathering on Sunday and had mulled another option to air their message by interviewing the speakers and posting the clips on social media.

The ban came as the media is stepping up calls for the NCPO to end its curb on media freedoms and lift martial law.