Prime Minister Prayut Chan-o-cha arrived in the northeastern province of Khon Kaen Wednesday on his first official visit to the region, promising policies to solve local issues including droughts. 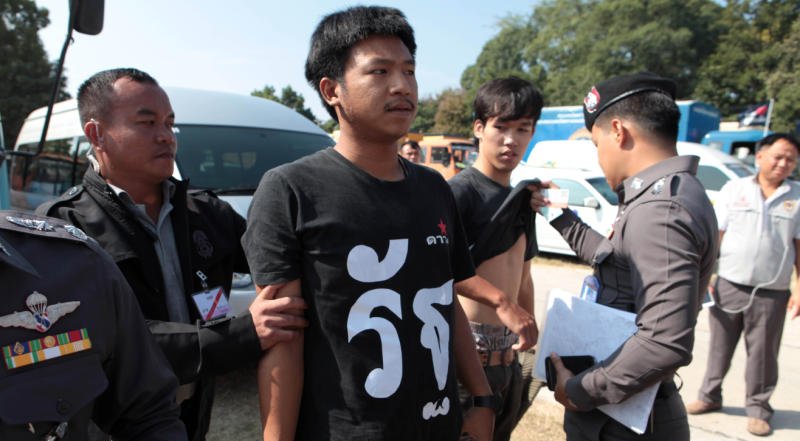 The five Khon Kaen University students who gave the three-finger salute were removed from the rally for Prime Minister Prayut Chan-o-cha and handed over to the military for "attitude adjustment". (Photo by Chanat Katanyu)

A group of Khon Kaen student activists surprised the prime minister with an anti-coup T-shirt greeting and a three-finger salute.

Wearing anti-coup T-shirts with the slogan "We don't want the coup", five Khon Kaen University students managed to sneak past the tight security to flash the three-finger salute taken from the movie The Hunger Games.

The five, who are members of the Khon Kaen University's Dao Din student group, were immediately taken away by military police.

The student demonstrators, identified later as Wasan Seksit, Jetsathit Namkot, Jatupat Boonpatraksa, Phayu Boonsophon and Wichakorn Anuchon, were grabbed by police and military security as they showed off their T-shirts and salutes. They were taken to the 23rd Military Circle's Sri Patcharin base to undergo "attitude adjustment", according to officials.

They were released after seven hours.

Sasinan Thamnithinan, a human rights lawyer, said that in return for their release by the military, the students had been forced to sign undertakings not to engage in political activity - on threat of expulsion from the law faculty at Khon Kaen University, where they study.

Within hours, the cinema group scheduled to open the new The Hunger Games: Mockingjay - Part 1 on Thursday, banned the film. The Apex group said it was not pressured by the government, but did not want to become embroiled in a political movement.

The prime minister's speech to unveil the policies at the provincial hall was an apparent bid to unveil his policies and tackle political differences, but the five students briefly disrupted the address to denounce the coup.

Anti-coup leaflets were found on streets surrounding the hall. The leaflets said "Isan does not welcome dictatorship", but were swiftly disposed of prior to Gen Prayut's arrival.

Khon Kaen is known to be a political stronghold of the red-shirt United Front for Democracy against Dictatorship movement and the Pheu Thai government toppled in the May 22 coup.

Before leaving Bangkok, Gen Prayut said the trip to the Northeast was to investigate local problems with the management of water resources, which are to blame for repeated water shortages.

He insisted the trip had nothing to do with politics amid speculation he was trying to win over people in the region.

He said it is his job to take care of all people across the country, adding that droughts pose an imminent threat so he must inspect water management plans.

For several years before the May 22 coup, hostile crowds had greeted and sometimes attacked visits to the region by politicians outside of Thaksin Shinawatra's Pheu Thai Party or its coalition partners.

The students were told to return to the army base with their parents to hear charges of violating NCPO orders. They refused to sign a document stating that they would not conduct any activities that go against NCPO orders.

The prime minister appeared relaxed about the incident.

"Well, that's it. But it's okay. Go easy on them. We will take care of the problems. Any more protests? Make them quick," he said. The prime minister, who smiled during the brief demonstration, joked later that he thought it was an entertainment show.

But in the Khon Kaen area, the protest went deeper than the anti-coup demonstration.

But in the Khon Kaen area, the protest went deeper than the anti-coup demonstration.

Dao Din members are also staunch supporters of local villagers troubled by various private and state projects in the Northeast.

The students have assisted local villagers suffering from environmental impacts caused by gold mining in Loei since 2007, a potash mining business in Udon Thani and oil exploration in Kalasin.

Prior to this incident, members of the group had been taken to army barracks for questioning.

Dao Din, which has about 20 members, has a clear target of promoting human rights-related laws among the public with activities held to interact with the locals.

Most members are law students at Khon Kaen University but some are from Mahasarakham University.

Dao Din members were involved in an effort to fend off policemen as they attempted to disperse a crowd of villagers trying to attend a public hearing on Tungkum Co's expansion of its gold mining operation in Wang Saphung district in front of Wat Phon Thong in Loei's Muang district on Sept 8 last year.

The group is seen as an ally of villagers who are troubled by influential business operators.

The prime minister made no mention of such problems as he continued his speech and tour on Wednesday.

Sida Sonsri, a university expert on political development and Southeast Asia who works in the Northeast, said she is uncertain if the prime minister will be able to woo locals, since the majority are still loyal to the previous government.

"It is not easy to change their views in one day," Ms Sida said.

However, she backed the premier's efforts to solve basic problems such as drought. She called on anti-coup and anti-government protesters in the Northeast to open their minds to the prime minister as a Thai person, not a soldier.

Prime Minister Prayut said he planned to follow up on the work of the new Damrongtham centres, set up by the Interior Ministry to receive and handle public complaints.

In Khon Kaen, Gen Prayut chaired a meeting of 20 governors from the Northeast and heads of several government agencies including the Royal Irrigation Department, the Natural Disaster Prevention and Mitigation Department and the Groundwater Resources Department.

He was briefed on water reserves and provincial preparations to deal with possible drought. Gen Prayut ordered officials to step up efforts in tackling chronic drought problems.

Gen Prayut also instructed provincial governors to do more to create jobs for local people, strengthen the economy in their provinces, and improve the livelihoods and well-being of the public.

After his visit to Khon Kaen, Gen Prayut went to inspect the water level of the Lampao dam in Kalasin province.

Amnuay Khlangpha, a former Pheu Thai Party MP, said the prime minister should focus on the work of the National Legislative Assembly, the National Reform Council and the Constitution Drafting Committee instead of making trips to the provinces.

"I'd like him to concentrate on the economic and political situation and make sure the elections take place as planned," he said.

Alongkorn Akkasaeng, a political science lecturer at Mahasarakham University's College of Politics and Governance, said he believes the prime minister will be able to win the hearts and minds of the majority of northeastern people if he softens his personality and listens more to those who have different ideas to himself.

"Gen Prayut is familiar with a top-down way of working. That's why he is applying this kind of structure to governing the country. There is too much bureaucracy in his administration," he said.

Mr Alongkorn urged the prime minister to work more closely with civil society to gather information and opinions beneficial to the country's development.