Two students, including one arrested in May for eating a sandwich while reading the book 1984, were detained at the Apex Group's Scala theatre for giving media interviews. A third was taken into custody outside Major Cineplex Group's Siam Paragon theatres after flashing The Hunger Games three-finger gesture symbolising rebellion against totalitarian rule. 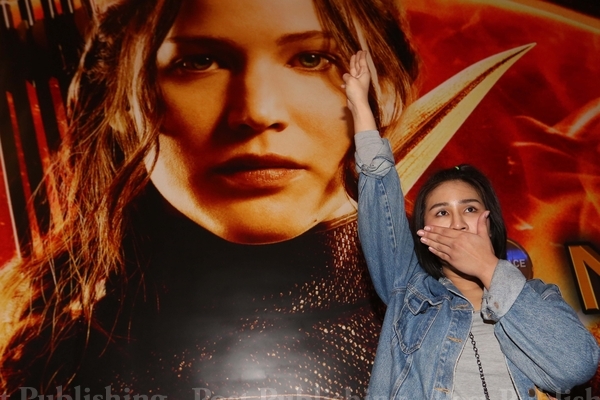 The protests came after management at Apex on Wednesday night announced the cancellation of Mockingjay Part 1 showings starting today because student activists had bought 200 tickets and planned to distribute them free via Facebook.

The League of Liberal Thammasat for Democracy invited the public through its Facebook page to join an activity it called Ram Kratua, Roast Popcorn and See Movie at 11.30am at the Scala. The group offered free tickets to the 12.40pm showing, which later was cancelled.

The Scala today was showing Magic in the Moonlight.

Despite the cancellation, student organisers showed up at the theatre anyway and two were arrested and taken to Pathumwan police station. The group's Facebook page said that they were detained due to giving interview to the media.

One of those detained at Siam Square was Rattapol Suphasopon, a senior at Thammasat University. The other was "Champ," who was arrested on June 22 after marking the one-month anniversary of the coup with sandwich-eating and reading in front of Siam Paragon.

Undeterred by Apex's cancellation of Mockingjay, the group moved their activity to nearby Siam Paragon.

There a third student, transgender female Natchacah Kongudom from Bangkok University, was taken into custody after flashing The Hunger Games' trademark three-finger salute, which anti-coup protestors have adopted as a sign of defiance.

Ms Natchacha said she joined the activity after learning about the arrest of students in Khon Kaen yesterday, which she viewed as depriving them of their right to expression. The five were arrested for flashing The Hunger Games salute and wearing t-shirts with anti-coup slogans at a speech by Prime Minister Prayut Chan-o-cha.

Ms Natchaha then tried to enter the cinema, but was intercepted by police. She raised the fingers of her right hand while covering her mouth with her left and was photographed by the media before being whisked away by officers. 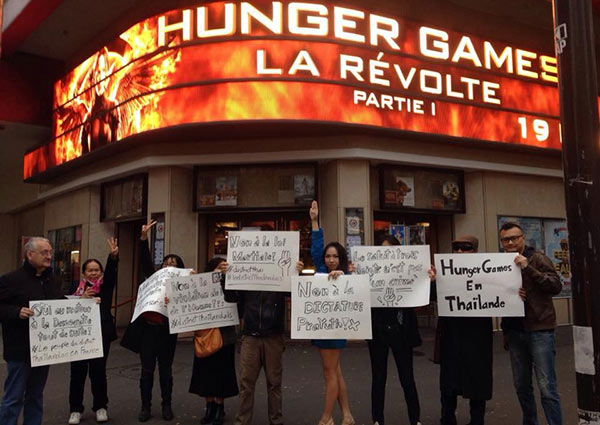