Five Khon Kaen University students were released without charge Thursday after being detained for their anti-coup protest the day before, but only two signed pledges to end their political activities.

The law students were released from the Sri Patcharin military camp in Muang district, according to a Facebook page from the Daodin political-activist group of which they are members.

While the five have avoided criminal charges, they must now wait to see whether the university will take action against them, the group noted. 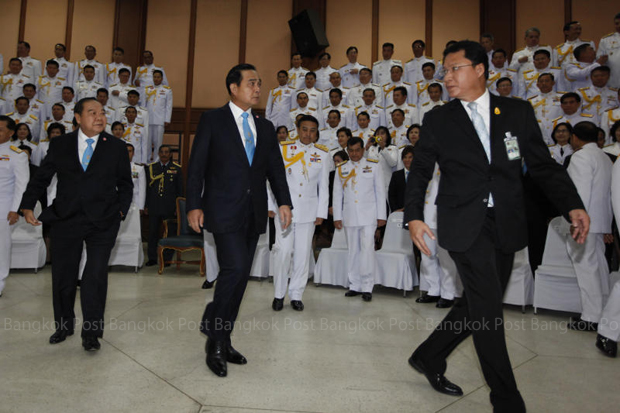 Prime Minister Prayut Chan-o-cha arrives at the National Defence College on Thursday to deliver a speech to students. He said he vowed to continue reform despite protests against the coup. (Photo by Pattanapong Hirunard)

Jarupan Boonpattararaksa, one of the detained students, told the Prachaithai website that their parents were called to speak with police, the faculty dean and provincial officials. Two students, Jetsit Namkhot and Payu Boonsophon, agreed to sign an vow to end their political activities. Wasant Setsit and Witthckorn Anuchon joined him in refusing to sign, Mr Jarupan said.

The students were taken away by police and soldiers for detention at the army barracks after they protested against the coup in front of visiting Prime Minister Prayut Chan-o-cha in Khon Kaen province on Wednesday. They showed the general an anti-coup message emblazoned on their t-shirts and made the three-finger gesture from The Hunger Games movie series.

In the films, the gesture symbolises rebellion against totalitarian rule. It has adopted by Thai anti-coup protestors worldwide as a sign of defiance.

The students' detention led to renewed calls for an end to martial law by 102 academics, writers, students and activists.

''Martial law must be immediately lifted to pave the way for the right and freedom to address problems affecting people,'' they said in the statement. They also said using martial law to prosecute students and the public was ''unacceptable''.

Calls government and National Council for Peace and Order action to end martial law resumed last week after threats by the mass media and the cancellation of a forum on land forum set for Nov 16. Another forum on land and tax issues with former finance minister and Democrat Party member Korn Chatikavanij set for Thursday also was ordered cancelled by soldiers, its organisers said hours before the event was to begin.

Gen Prayut said at the National Defence College that he was not angry over the Khon Kaen protest and vowed to continue pursuing reform to heal the country away of political division.

"No one will visit Thailand if we continue to quarrel. I'm on the people's side," the general said. "Other countries understand this, but we (at home) don't. It's as if we are all not speaking the same language. What I can do is be patient."

Police spokesman Prawut Thawonsiri defended the action of authorities, saying measures to control anti-coup activists were necessary so that they will not disrupt the government. They will be temporarily detained and released after reaching an "understanding" with authorities, Pol Lt Gen Prawut added.