Metropolitan police and soldiers from the 1st Artillery Regiment have arrested the man believed responsible for producing anti-junta leaflets around Democracy Monument Sunday.

Army Col Kachachart Boondee said Tuesday night's arrest of Sithithat Laovanichthanapa, 54, followed a police investigation and examination of footage from closed-circuit television cameras in Bangkok's Samranrat area. He is accused of writing and printing the leaflets while another man is being pursued for distributing them around the Ratchadamnern Avenue monument. 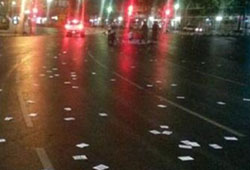 Police alleged that CCTV showed a man - identified by police as Wachira Thongsuk  - arriving in Soi Samranrat on a motorcycle and taking a bag from the boot of Mr Sithithat's Mercedes-Benz early Nov 23.

Mr Sithithat reportedly said he began writing the anti-National Council for Peace and Order leaflets around 7pm Saturday night and finished printing them about 3am Nov 23.

Police claimed he admitted putting a bag containing the leaflets in the boot of his car and drove to Soi Samranrat where he gave the bag to Mr Wachira Thongsuk.  It was Mr Wachira who took the bag on his motorcycle and dropped the leaflets around the Democracy Monument at about 5am, police said.

Mr Sithithat also is said to have admitted joining the PDRC protests on Ratchdamnern Avenue to gather information, explaining why he had PDRC shirts in possession.

Col Kachachart said Mr Sithithat would be charged for violating martial law and might have to stand trial in military court.