Prime Minister Prayut Chan-o-cha on Friday defended the government's decision to block the website of the Thai branch of Human Rights Watch, saying the page has been barred because it breached rules on national security. 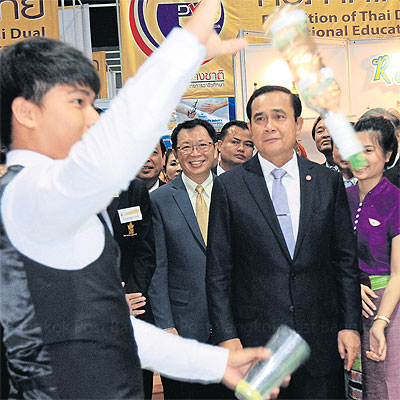 Prime Minister Prayut Chan-o-cha watches a bartender show off his skills after delivering a speech at a conference about vocational education yesterday. Gen Prayuth defended the government's decision to block the website of the Thai branch of Human Rights Watch for publishing 'insulting' comments about the military regime. (Photo by Tawatchai Kemgumnerd)

Speaking after returning from official visits to Laos and Vietnam, Gen Prayut said the site blackout was ordered by the Ministry of Information and Communications Technology.

The premier said he had previously told the ministry about his views on how to maintain order in the country, but the department has since drawn up its own rules on the matter.

"How have they been muzzled? Before making complaints, have a look at what they wrote," Gen Prayut said.

"If people say others should have the freedom to write anything and insult anyone, then let's try it. Thailand will not survive."

In recent weeks Human Rights Watch had heavily criticised the military government for its crackdown on dissent.

Gen Prayut also lashed out against some newspapers for writing groundless reports on inconsequential issues.

"I am not your foe. I read your newspapers every day but select the stories which are more constructive and intellectual," Gen Prayut said, asking the media to write more about the government's new policy initiatives.

The premier brushed aside criticism against his administration on social media, saying foreigners had praised him for his vision during his overseas visits.

The majority of "resentment" he faces comes from people in Thailand, Gen Prayut said.

The premier departed Vietnam following a two-day trip on Friday.

The president of the Thailand-Vietnam Friendship Association, Ta Quang Ngoc, paid a courtesy call upon Gen Prayut before he left.

Gen Prayut thanked the association for strengthening ties between Thai and Vietnamese people.

He said close relationships will endure following the formal establishment of a strategic partnership between the two countries last year.

The Thai government will support the association to hold activities marking the 40th anniversary of diplomatic relations between the countries in 2016, the premier said.

Mr Ngoc meanwhile praised proposals to "twin" Chachoengsao province with the Vietnamese city of Chan Tho. He said the association will help to make sure the plan materialises quickly.

He said he hoped Gen Prayut's visit would help expand two-way trade and investment between the countries.

He thanked the chairman for a warm welcome and made a speech setting out the next steps for close cooperation between Thailand and Vietnam.

Mr Hung visited Thailand as a guest of the Thai parliament in 2012.

The Vietnamese official said he is glad there has been a continuous close relationship between the two parliaments, with reciprocal visits of key government figures.

Gen Prayut has confirmed that Thailand will send delegates to the 132nd Assembly of the Inter-Parliamentary Union and related meetings, due to be held in Vietnam in March and April next year.

The premier said he wanted to see legislative cooperation between the two countries, notably between the Thai National Legislative Assembly and National Reform Council and the National Assembly of Vietnam.