Democrat Party leader Abhisit Vejjajiva on Wednesday warned of a possible setback to the idea of voters to directly electing a prime minister. 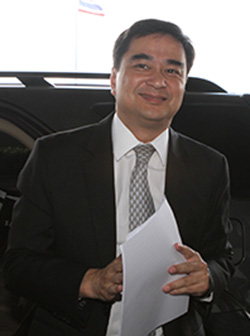 Mr Abhisit said the proposal could lead to more political problems in the country as a premier coming to power via a direct-voting system could open the way for the winner to possibly abuse their authority.

A government leader directly voted into Government House could use the popular mandate as a claim to do anything at will, he added.

A panel on political reform under the National Reform Council last week proposed direct election of the prime minister and cabinet ministers. But the idea has drawn criticism, with opponents saying it could give more power to the cabinet and weaken the checks-and-balance system of parliament.

Mr Abhisit said the plan missed the mark on attempts to end abuse of authority by politicians and suggested the present parliamentary system continue with laws and regulations to take sterner action against politicians who are corrupt and use their positions for personal gain.

The proposal will be forwarded to the Constitution Drafting Committee (CDC) on Dec 19.

Constitution Drafting Committee chairman Bowornsak Uwanno on Monday tried to ease concern of critics, saying it was only a suggestion and the process of writing a new charter will continue through July.

Politics is plagued by street rallies over the past years as Thaksin Shinawatra and other prime ministers backed by him are accused of using cabinet positions to abuse authority. The problems culminated in the coup on May 22.