The prime minister should not necessarily be an elected MP and senators should be authorised to screen ministerial nominees, the Constitution Drafting Committee resolved on Thursday. 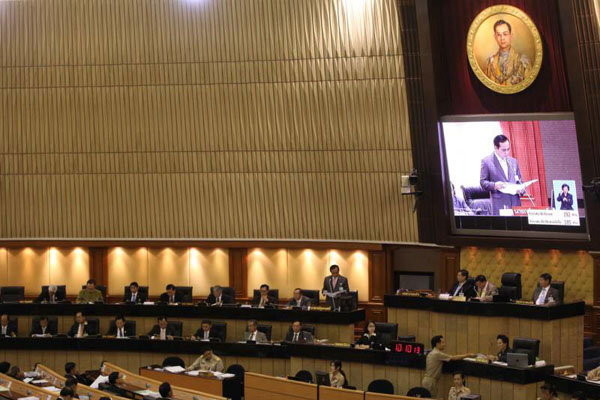 The Constitution Drafting Committee resolved on Thursday that the new charter should provide for a non-elected prime minister in the event of a political crisis. (Photo by Pattarachai Prechapanich)

CDC spokesman Khamnoon Sidhisamarn said it was agreed that the House of Representatives would still be tasked with nominating the prime minister, but it should not be a requirement that the prime minister be an elected member of parliament.

That was to allow an outsider to be made prime minister in the event of political crises such as had occurred in the past, he said.

In a normal situation, the House would elect an MP to the post of prime minister, he said. 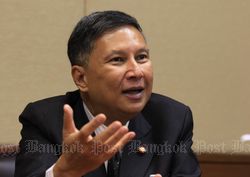 On the makeup of the Senate, the CDC resolved there would be 200 senators, both appointed and indirectly elected. Mr Kamnoon said that was to ensure the Senate represents all power groups in Thailand, instead of only politicians sitting in the lower House.

Mr Kamnoon was an appointed senator during the pre-coup government, a member of the fiercely anti-government "Group of 40" upper house members who sought to impeach and oust then-prime minister Yingluck Shinawatra. He is closely identified with Thai "patriotic" organisations.

On Thurday, Mr Kamnoon said he favoured a new set-up where senators would de drawn from five groups:

The first group should comprise former leaders of the three power pillars: the 12 living former prime ministers, the tiny numbers of former House speakers who are not members of a political party, and former court presidents.

Former high-ranking government officials would form the second group. They include former permanent secretaries of ministries and former chiefs of the armed forces.

The third group would involve chairs and representatives of professional organisations certified by law, such as the heads of the Thai Chamber of Commerce, the Federation of Thai Industries and the Medical Council of Thailand.

The fourth group should represent the civil sector and include agricultural cooperatives, labour unions and people's organisations.

Senators from the four pools would be selected through a process that would be determined later, Mr Kamnoon said.

Senators from the fifth group would be indirectly elected. They would first be selected by professional councils and then selected by a voting process by the people.

Mr Kamnoon also said that senators would have more power, as they would propose reform bills to proceed with national reform and scrutinise the profiles of  nominee cabinet ministers before the prime minister submitted the list for royal approval.

The CDC also favours giving senators authority to vet the profiles of heads of all governmental organisations and publish the details.

It was also resolved that the Senate, together with the House, should be able to remove the prime minister, cabinet ministers, MPs, senators and high-ranking officials, but this would require supporting votes from more than half of the members of the Senate and the House.

Mr Kamnoon said that the CDC had not reached any conclusion yet on the proposed term of senators.