Opposition to the military-led government could gain momentum this year, but it depends upon economic stability, actions by Thaksin Shinawatra and the fate of Yingluck Shinawatra, said red-shirt leaders assessing the political landscape. 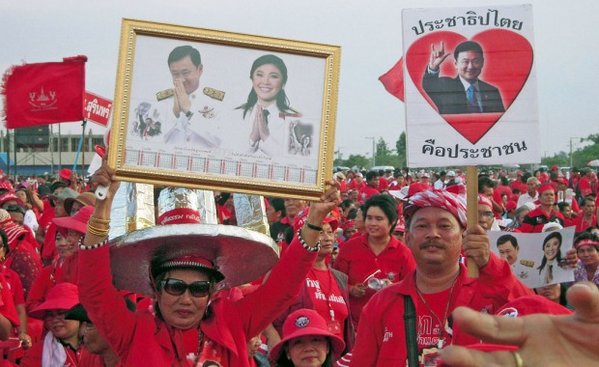 They are still the favourites of the red shirts, but it is becoming evident that the grassroots are growing impatient with Thaksin and Yingluck Shinawatra. (AP photo)

The year 2015 will be critical for Thai politics, and former prime minister Thaksin will have to weigh his steps carefully, said a leading Northeast-based red shirt who, fearing repercussions from the military, agreed to speak to the Bangkok Post on the condition he not be named.

He said the entire red-shirt movement is waiting to see what Thaksin does next.

"If he lets time pass and does not make any big moves, his fate would be like that of Pridi Banomyong," the source said, referring to the former premier and statesman who died in exile in Paris.

He said many red shirts are disappointed that Thaksin and Pheu Thai Party leaders have gone quiet, instead of fighting for peoples' civil liberties.

"If Thaksin compromises with military leaders for his own benefit, he will lose the people's support and will not be able to mobilise people power again," the source said.

The economy and the impeachment case against Ms Yingluck will also be key factors in influencing opposition to the government, he said.

"If economic problems hit the grassroots, it will cause an anti-establishment uprising," he said. Similarly, the pro-Thaksin camp could revolt if Ms Yingluck is impeached on negligence charges related to alleged corruption in her government's rice-pledging scheme.

Jaran Ditapichai, a leading red-shirt intellectual, said the power of those in exile against the government is limited. He said that only six people who had fled Thailand following last year's coup had obtained asylum status in Europe and America.

Most of the exiles remain scattered among transit countries and are in the process of seeking asylum, said Mr Jaran, a former human rights commissioner. The future for those facing lese majeste charges is even more cloudy.

"Even if there is an election and national reconciliation, these people charged with lese majeste might not be able to return home," he said.

Any reconciliation package is unlikely to cover crimes against the monarchy, said Mr Jaran, who is also facing a lese majeste charge and lives in exile in Europe.

He conceded life was not so rosy for refugees, and even more difficult for asylum seekers. Their only weapon is criticising the coup-installed government through radio, TV and online forums.

The anti-coup Free Thai Movement, led by a former deputy leader of the Pheu Thai Party, Jarupong Ruangsuwan, has remained lacklustre due to several limitations, he said.

"They've issued anti-coup statements and tried to support democracy lovers both inside and outside Thailand when possible," said Mr Jaran.

Watt Wallayangkoon, the writer whose works influenced many young activists in the 1970s, said he felt similar to when he fled into the jungle after the October 1976 massacre to join the now defunct Communist Party of Thailand.

"A coup is coup. You can't wait for nice things to happen. And as an intellectual, you can't produce your work in a dictatorial environment," said Mr Watt, who is also in exile.

He is not facing a lese majeste charge, but the spectre of prosecution hangs over him. Some of his friends who reported to the military are in jail. Mr Watt criticised the mentality of many in the middle class and elite who support the coups, calling them "blinkered apologists".

Verapat Pariyawong, an independent law expert and a red-shirt supporter who has remained outside Thailand since he was summoned by the coup-makers, said the junta's strategy of suppressing dissent against students, activists, reformists and academics would only trigger more critics and sympathy from around the world.

"To prevent the country from sliding further into that predicament, the current rulers have to give others a say without all this creeping coercion, such as forcing them to sign documents or keeping vigil at their houses," said Mr Verapat, speaking from Europe.

Meanwhile, Maj Gen Sansern Kaewkamnerd, a deputy government spokesman, said he would not predict whether the opposition was likely to gain momentum in 2015, but he pleaded with critics to be patient with the government.

"We've stepped in so the capital wouldn't suffer more blasts and bombs, so all stakeholders should cooperate," said Maj Gen Sansern.

"We've provided venues for those who want to offer proposals." 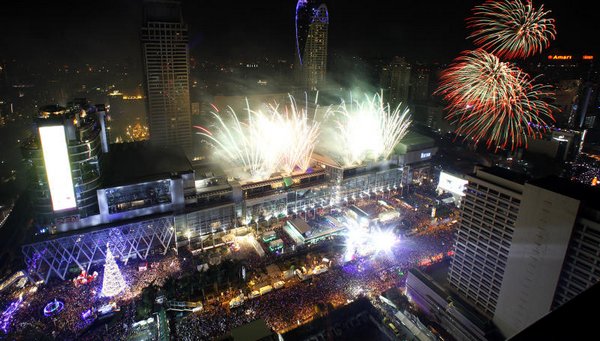 A large crowd enjoys a fireworks display outside the CentralWorld shopping mall during the New Year's Eve Countdown 2015. (Photo by Thanarak Khunton)