The counting of the votes by the members of the National Legislative Assembly on the impeachment of Yingluck Shinawatra. (Photo by Pattarachai Prechapanich)

The 220-member NLA voted to impeach Ms Yingluck by 190 to 18 with eight abstentions and three invalid ballots.

An impeachment motion requires the support of three-fifths of NLA members, or 132 votes of all 220 NLA members.

The assembly started its session about 10.20am. The voting process finished about 11.45am and the counting of votes was concluded about 12.20pm.

The National Anti-Corruption Commission (NACC) had petitioned the NLA to remove Ms Yingluck, a younger sister of former prime minister Thaksin Shinawatra. The NACC accused her of dereliction of duty for failing to stop corruption and losses in her government’s rice-pledging scheme implemented from 2011 to 2014. She chaired the National Rice Policy Committee when she was premier.

The Finance Ministry earlier concluded her rice-pledging scheme caused the state losses exceeding 500 billion baht and the NACC defined her rice scheme as an example of policy-based and complicated corruption which plagued various stages of the scheme's implementation.

The anti-graft agency had moved to impeach Mr Nikom for cutting short parliamentary debate on constitutional amendments to change the make-up of the Senate in 2013.

Mr Somsak had been accused of tolerating the inappropriate change of the constitutional amendment bill  in the same year, to allow senators to continue with their new term without a break. (contnued below) 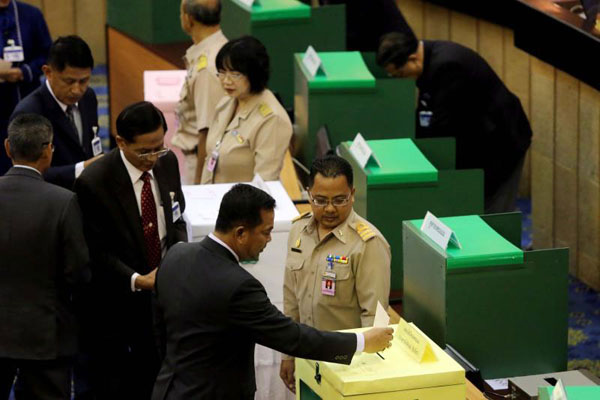 NLA president Pornphet Wichitcholchai said after the vote that Mr Nikom and Mr Somsak were not impeached because the NACC had accused them of violating the 2007 constitution and there were doubts that remained a violation because the constitution had been revoked.

In the case of Ms Yingluck, Mr Pornphet said that the NACC had charged her with intentionally violating the State Administration Act by tolerating corruption in the rice scheme.

He said there were 190 votes in the NLA for her removal and it was understood that members were convinced by the evidence the NACC had presented, Mr Pornphet said.

He insisted that all NLA members had freedom in their vote and there were neither a hidden agenda nor any influence brought to bear.