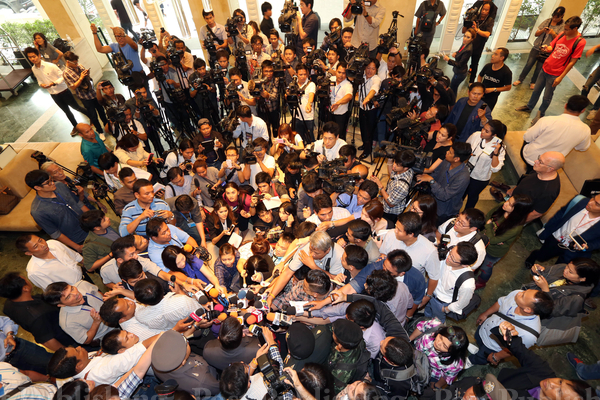 A large group of reporters gather around Singthong Buachum, who announced "no press conference' for Yingluck Shinawatra at the SC Park Hotel. (Photo by Kitja Apichonrojarek)

After scuttling the session at Bangkok's SC Park Hotel, Ms Yingluck posted a statement on her personal Facebook page.

Amidst tight security that included uniformed and plainclothes police and soldiers, Singthong Buachum, a member of the Pheu Thai Party legal team, told a crowd of reporters at the Shinawatra family-owned hotel that there would be no press conference by Ms Yingluck to discuss her retroactive removal from office and ban from politics for five years.

"We would like to confirm to the NCPO and the government that there will be no press conference by Ms Yingluck, as we have to respect the legal procedure and justice system," he said.

Ms Yingluck was charged by the National Anti-Corruption Commission with dereliction of duty in failing to properly oversee her government's loss ridden rice pledging scheme. The National Legislative Assembly confirmed the charges and impeached her by a vote of 190 to 18 Friday.

Earlier today, reporters had been told the press conference would start around 3.30pm, so a large group of Thai and foreign media gathered at the hotel.

However, NCPO spokesman Winthai Suwaree said the NCPO sought cooperation from Ms Yingluck not to hold the conference, as martial law was still in effect and prohibits events related to politics.