Yingluck vows to fight on for justice, democracy
Thailand
Politics

Yingluck vows to fight on for justice, democracy

Former prime minister Yingluck Shinawatra promised a good fight on Friday to prove her innocence and return justice and democracy to Thailand.

"Democracy has died in Thailand today, along with the rule of law," Ms Yingluck said in a statement released Friday on her personal Facebook page. 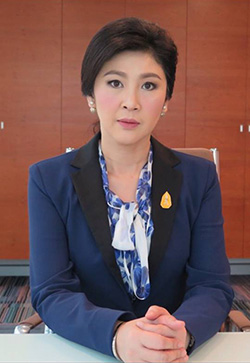 Former prime minister Yingluck Shinawatra shows her image on her Facebook page with messages to fight against injustice after the NLA impeached her and state prosecutors decided to file ciminal charges against her on the rice-pledging scheme. (Photo from Yingluck's Facebook page)

The former premier took to Facebook to offer her reaction to Friday's vote to impeach her after the National Council for Peace and Order requested her "cooperation" in cancelling a planned press conference at Bangkok's SC Park hotel. She now will face criminal charges to be filed by the Office of the Attorney General.

"The move to destroy me is still on-going and I face it now," she wrote. "(But) I am strongly determined to fight until the end to prove my innocence, regardless of what the outcome may be."

Ms Yingluck also promised to stay alongside the people to restore democracy.

"Thai people can go on without Yingluck. But ... no one can survive if there is no justice in Thailand," she wrote.

Her condemnation came hours after the National Legislative Assembly voted to impeach her 190 to 18 with eight abstentions and three invalid ballots. Ms Yingluck is the first prime minister impeached in Thai political history and will be banned from politics for five years.

"The vote came out as expected," she said.

The impeachment vote followed the decision by the OAG to press criminal charges against her over the controversial rice-pledging programme.

The embattled former prime minister said the two moves were not a "co-incidence" and warned that reconciliation efforts would be endangered if justice cannot prevail.

"Reconciliation is possible without attempts to corner one person in particular," she said. "I don't hold any positions. What I have left is the legal case imposed on me to fight it in court."

Ms Yingluck reminded her supporters of her pledge to pursue reconciliation during a speech delivered at an international conference in Ulan Bator in Mongolia on April 29, 2013.

"I would like to see reconciliation and democracy gain strength. This can only be achieved through strengthening of the rule of law and due process." she said at the time while calling for other countries to step in to fight "anti-democratic regimes".

The OAG will pursue criminal charges over financial losses racked up during the rice-pledging scheme at the Supreme Court's Criminal Division for Political Office Holders in one month.

The former premier defended the programme, saying farmers have lost the opportunity to overcome hardship and now were returning to a circle of debt and poverty.

Her brother, Thaksin, was convicted and sentenced to two years in jail by the Supreme Court in 2008 for abuse of authority during his term as prime minister in order to help then-wife Potjaman purchase of a prime real estate plot on Ratchadaphisek Road. He left the country for self-exile before the court's verdict.