The harsh criticism of Thailand by Washington's assistant secretary of state Daniel Russel was preferable to the way the US Central Intelligence Agency (CIA) had intervened in other country's affairs, Pornpetch Wichitcholchai, president of the National Legislative Assembly (NLA), said on Thursday. 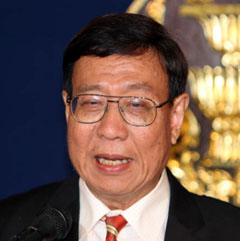 He was responding to Mr Russel's comments during his visit to Thailand on Monday about the impeachment of former prime minister Yingluck Shinawatra and the continued enforcement of martial law.

Mr Pornpetch said that he was not surprised Mr Russel had met in Thailand with groups of people in a way that violated appropriate diplomatic practice because the US State Department often acted this way.

However, that was still better than sending CIA agents to intervene in the internal affairs of countries, Mr Pornpetch said.

He said the US view of democracy in the Middle East and Asia centred on elections, without taking into account the context of the situation. Washington simply ignored aspects like riots and divisions in countries like Vietnam and Korea for example.

As long as there was election, the US was satisfied and paid no attention to other matters.

Mr Pornpetch said the National Council for Peace and Order (NCPO) had monitored the situation in Thailand for 10 years, and six months before the May 22 coup people had been divided, war weapons had been used and protesters had filled streets.

Asked about the impeachment of Ms Yingluck over her government's loss-ridden rice scheme, Mr Pornpetch said the NLA's decision was constitutional and complied with anti-corruption laws.

The US had impeached former president Richard Nixon only for spying political opponents, and Bill Clinton for relations with his personal secretary, he said.