Pichai Naripthaphan and Chaturon Chaisang from the Pheu Thai Party have been ordered to report to the National Council for Peace and Order (NCPO) after making political comments or criticising the government. 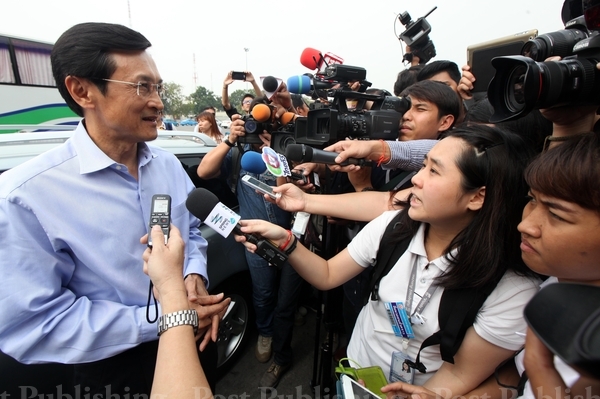 Chaturon Chaisang talks to reporters at the Royal Plaza on Thursday before reporting to the National Council for Peace and Order. (Photo by Thiti Wannamontha)

Others summoned to appear are Surapong Tovichakchaikul and Cherdchai Tantisirin, a former Pheu Thai MP for Khon Kaen.

Next in line is Nattawut Saikuar, who has been ordered to meet the council on Friday.

The red-shirt leader posted a message on his Facebook page criticising the impeachment of former prime minister Yingluck Shinwatra by the National Legislative Assembly last Friday. He said it was unfair and part of the attempts to clamp down politicians of the Pheu Thai camp.

Mr Pichai, Mr Surapong and Dr Cherdchai made comments on the continued enforcement of martial law and the present political situation in the country after US Assistant Secretary of State Daniel Russel dropped a political bombshell during a visit to Thailand on Monday criticising martial law and the impeachment of the former prime minister.

The US official's comments were echoed in the same tone by the three in following days.

Mr Pichai, a former energy minister, on Tuesday welcomed the remarks by the US visitor and warned of the plunging Thai image in the international community. Mr Surapong, a former foreign minister, said the views of Mr Russel reflected the majority of people in Thailand.

Prime Minister Prayut Chan-o-cha mentioned the names of Mr Pichai and Mr Surapong in his meeting with senior government officials hosted by the Agriculture and Agricultural Cooperatives Ministry on Thursday and said: ''Tell me what they want me to do."

Asked whether their comments were disturbing the work of the government, Gen Prayut, who was apparently emotional, said: ''Not disturbing. But it's annoying.''

Mr Chaturon wrote on his Facebook page on Thursday questioning whether the military regime was a solution to the problem and criticising it for attempts to silence opinions that it did not want to hear.

The former education minister also posted an image on his page on Wednesday with a message reading ''Democracy has died. And no one knows whether or not it will reborn soon." Mr Chaturon said he was willing to meet the generals.

He met soldiers at the Royal Plaza before being escorted to the head office of the army's First Region nearby.

Mr Pichai said he has not been officially contacted by the council and added he was ready to follow the order. The former energy minister however insisted his comments were not made with the intention of creating a rift as he was worried about the economy.

Mr Surapong was taken from a restaurant in Muang Thong Thani to the headquarters of the First Region to meet regional commander Lt Gen Kampanat Rutdith for three hours before leaving the camp.

Soldiers went to his house on Thursday after he did not report to the NCPO on Wednesday. Mr Surapong was out for lunch at a restaurant before they arrived and the soldiers went to the place, waiting for him until he finished his meal.

Gen Prayut told reporters that soldiers would "invite" those ordered to report to the NCPO wherever they were.

The prime minister did not rule out members of the media being summoned to the council if reporters continue to ask questions that were not "constructive".

"Next could be you if you continue to bombard me with questions that are not constructive," Gen Prayut said.

Dr Cherdchai went to the Sripatcharin camp in Muang district in Khon Kaen to meeting local senior army and police officers and provincial governor Kamthorn Thawornsit and the former MP agreed to cooperate with authorities and the government on its roadmap to return the country to democracy.

Army commander Gen Udomdej Sitabutr said all were called to "adjust their attitudes" and would be allowed to go home.