Forensic police officers at the bomb scene in front of the Siam Paragon shopping centre collect samples for use as evidence on Monday. (Photo by Thanarak Khunton) 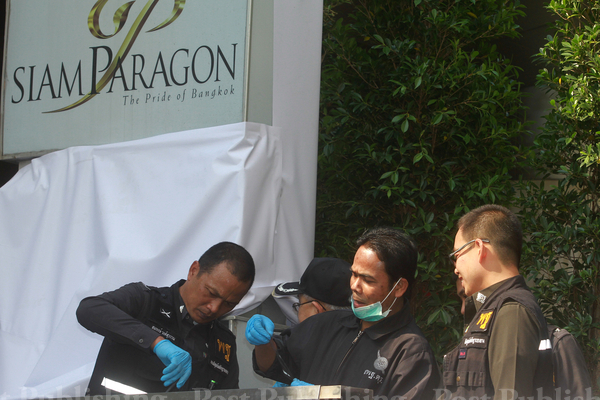 Forensic police officers at the bomb scene in front of the Siam Paragon shopping centre collect samples for use as evidence on  Monday. (Photo by Thanarak Khunton)

Speaking before his departure from the air force terminal at Don Mueang for an inspection trip in Phimai district of Nakhon Ratchasima province on Monday morning, Gen Prayut said he had ordered Gen Prawit Wongsuwon, the deputy prime minister in charge of security affairs, to investigate.

"We have to find out who were responsible for the bombs and whether they had a connection with any political group. Police are working on this. I was told of the incident last night," Gen Prayut said.

The prime minister said the authorities would have to find out whether people who had earlier mentioned the possible use of violence against the government had anything to do with the bombs.

Gen Prawit said he had ordered that security measures be increased for public places. The people should also act as eyes and ears, because they  are the ones who would be affected if there is more violence, he said.

Asked if the bombers hoped to create unrest and discredit the government, Gen Prayut said: "You already know this. Why even ask?"

Gen Prayut said he believed the authorities would eventually catch the culprits. Footage from security cameras would be the key. Authorities needed time to investigate and it might be necessary for them to do their work in secret.

Gen Anupong Paochinda, the interior minister, said the bombs were apparently not intended to kill, but to cause unrest. The police were compiling the evidence, including surveillance camera footage.

Gen Prawit on Monday morning called a meeting of security agencies to discuss last night's bombing, according to his security adviser Panithan Wattanayagorn.