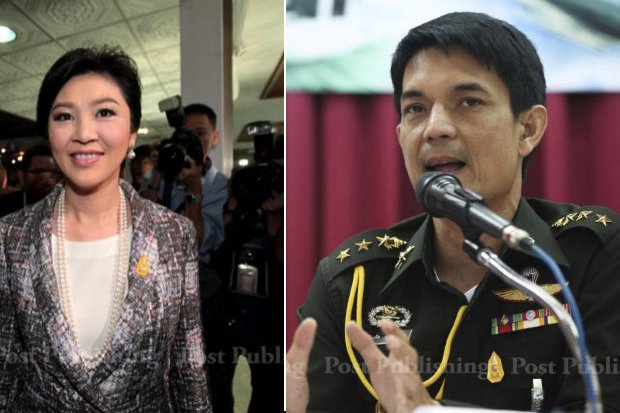 Former prime minister Yingluck Shinawatra got the word directly from the junta's mouth - Col Winthai Suvaree: She is to stay in Thailand while military authorities ponder whether she can leave while there are legal proceedings under way. (Bangkok Post file photos)

The matter is time consuming because Ms Yingluck is facing indictment for dereliction of duty in the rice-pledging scheme, Col Winthai said.

"The NCPO must be careful when considering her travel requests, to avoid affecting legal proceedings," Col Winthai said, countering claims the NCPO had rejected a request from Ms Yingluck to go abroad.

Netizens claimed the NCPO rejected the request because the Office of the Attorney-General (OAG) is preparing to indict her in the Supreme Court's Criminal Division for Political-Office Holders.

Ms Yingluck is charged with dereliction of duty for failing to stop losses and corruption in her government's rice-pledging programme in violation of Section 157 of the Criminal Code and National Anti-Corruption Act.

Ms Yingluck has also been impeached by the National Legislative Assembly (NLA) after the National Anti-Corruption Commission filed a petition against her. She was subsequently banned from politics for five years.

Prosecutors will submit the dereliction of duty case to the Supreme Court by Feb 21, said OAG spokesman Wanchai Rujanawong.

Col Winthai said the NCPO may need to work with state agencies to seek legal advice on how to handle Ms Yingluck's future travel requests.

"Read the newspapers and see what they say," he said before leaving for Japan Sunday.

Ms Yingluck's lawyer, Norrawit Lalaeng, said he was only responsible for the rice-pledging scheme case and could not comment on her travel request.

The OAG was still drafting the indictment and had not yet filed it with the Supreme Court, he said. It is not known whether the indictment will be accepted.

Meanwhile, the NCPO will invite all foreign military attaches based in Thailand for a briefing on Wednesday, an army source said.

The invitation will be sent by the army's intelligence department.

Lt Gen Supakorn Sanguanchartsorakrai, the deputy army chief of staff, will preside over the briefing session.

Ms Yingluck's impeachment, consideration of her travel request and the bombings last Monday near Siam Paragon will be discussed at the briefing, said the source.

Other topics will include the arrest of a suspect last week for spreading a forged statement on His Majesty the King's health, the summoning of political figures and academics to report to military officials, and the need to uphold martial law.