Section 44 of the interim charter was invoked Wednesday, giving the army the power to tighten security, clamp down on threats to the monarchy, and close media outlets.

National Council for Peace and Order (NCPO) chief Prayut Chan-o-cha signed the order after His Majesty the King approved the end to martial law in the country.

According to the order, soldiers can detain people who harm national security for seven days without a court warrant.

Soldiers also have the authority to ban the dissemination of media reports if they believe they may harm national security. 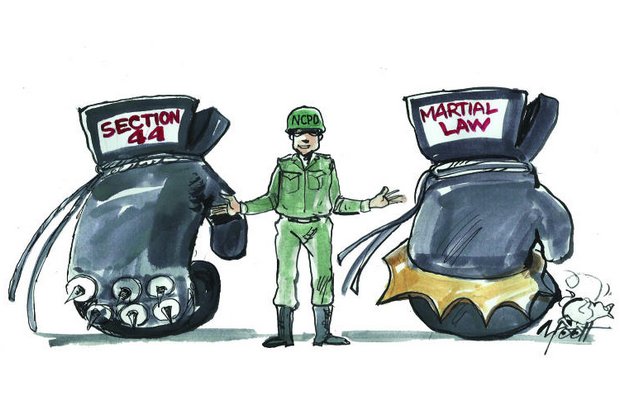 They can raid any location or property, search any vehicle and summon anyone for interrogation.

In addition, political gatherings of more than five people are prohibited.

Earlier in the day Gen Prayut, also prime minister, said he intended to invoke Section 44 to tackle many pressing problems.

Meanwhile, critics again warned the general against his tendency to overreach his power which is absolute under Section 44.

Section 44 allows the NCPO chief to exercise the powers of the executive, legislative and judicial branches for security and the national interest.

Contrary to initial impressions he would invoke Section 44 only in extreme situations, Gen Prayut said he actually intends deploying it to handle a wide variety of issues.

He said he would use it to correct problems surrounding the allocation of land and forest resources, tackle discrepancies in society, improve justice, resolve the aviation problem and deal with the human trafficking scourge.

Gen Prayut said on Tuesday he had submitted an announcement lifting martial law to His Majesty the King for endorsement.

"Aside from arguing about the martial law and Section 44, one should also think as to why these laws are needed," Gen Prayut said Wednesday.

"Some may say the invocation of Section 44 is far too extreme. But without it, can we bring the situation under control? Every day, they keep criticising it in the newspapers, but in reality it's only me who takes all the responsibility.

"From the first day that I became the NCPO chief, I intended to resolve all these problems, and I am responsible for doing so," he said.

Gen Prayut said nobody could do anything about the problems facing the country before the May 22 coup which resulted in a political deadlock.

The country may need at least 10 more years to fix these problems, but his responsibility now is only to set guidelines on how to tackle the problems.

He said any country encountering extreme conflicts similar to those in Thailand before the coup also needs this type of law to get the situation under control and break the impasse.

"They said I should be ashamed of using martial law. Why should I? Shouldn't those involved in the political conflicts be the ones ashamed of this? I opted to use the law because I wanted to end the problems and stop the bloodshed," Gen Prayut said.

The official text of the order to invoke Section 44 of the interim constitution: 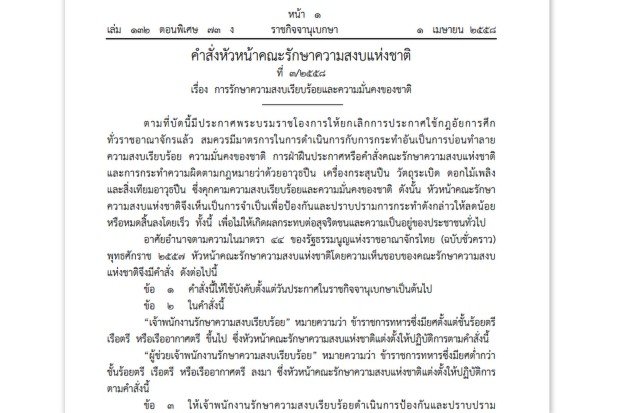