Press warns on perils of Section 44

Late last December, the four major press organisations held a meeting with Prime Minister Prayut Chan-o-cha, and presented amulets for New Year luck. But on Thursday, the same groups issued statements warning of threats against the media under the newly invoked Section 44 powers of the interim constitution. (File photo by Post Today)

Four core media bodies have expressed alarm over the military regime's power to ban media reports, invoked under Section 44 of the interim charter, and called on the junta to define the order's scope.

Section 44 of the interim charter, which was invoked on Wednesday to replace martial law, gives the military the power to deal with lese majeste offences, threats to national security, possession of firearms and ban media reports deemed to affect national security.

Prime Minister Prayut Chan-o-cha, who is also the National Council for Peace Order (NCPO) chief, signed the order after the King approved an end to martial law.

The four media organisations called an urgent meeting Thursday at the TJA and issued a joint statement which said the power to ban media reports violates the media's freedom of expression more than martial law.

The order empowers the military's peace-keeping officers to ban presentations, sales and dissemination of news reports and publications that cause public fear, or distort information causing misunderstandings and affecting national security.

Those who disobey or violate their orders, or resist or obstruct officers, face a jail term of up to a year and/or a fine of up to 20,000 baht.

The media bodies said Section 44 gives the military sweeping powers without setting out clear criteria on which reports represent threats to national security.

The lack of clear criteria could lead to actions that do not comply with the intention of the order, the four media organisations said. They called on the NCPO chief to lay down a clear policy on the matter to allay media and public concerns, and to ensure that the power invoked under Section 44 will be exercised constructively as has been promised by Gen Prayut.

They warned that the order could affect the fundamental rights of the public and the media and that such power must be exercised with utmost caution.

Manop Thip-osod, TJA vice-president on press freedom and media reform affairs, said the four core media organisations have to wait and see how the NCPO chief will respond following the statement.

"We will have a new round of meetings again to assess his stance on the media after this. We will discuss the next step of whether we should send our representatives to meet him [Gen Prayut] in person or not," Mr Manop said.

Section 44 also authorises the NCPO chief to exercise the powers of the executive, legislative and judicial branches of government in order to promote reform and unity, and to suppress any threats to national security, the royal institution and the economy.

"Normally, I would warmly welcome the lifting of martial law - and indeed strongly advocated for it to be lifted in Thailand," the high commissioner said.

"But I am alarmed at the decision to replace martial law with something even more draconian, which bestows unlimited powers on the current prime minister without any judicial oversight at all."

"This clearly leaves the door wide open to serious violations of fundamental human rights. I appeal to the government to ensure that these extraordinary powers, even if provided for by the interim constitution, will nevertheless not be exercised imprudently," he said.

Below: The beginning of the official order invoking Section 44 of the interim constitution for the head of the National Council for Peace and Order (NCPO), and an English-language summary of the document. 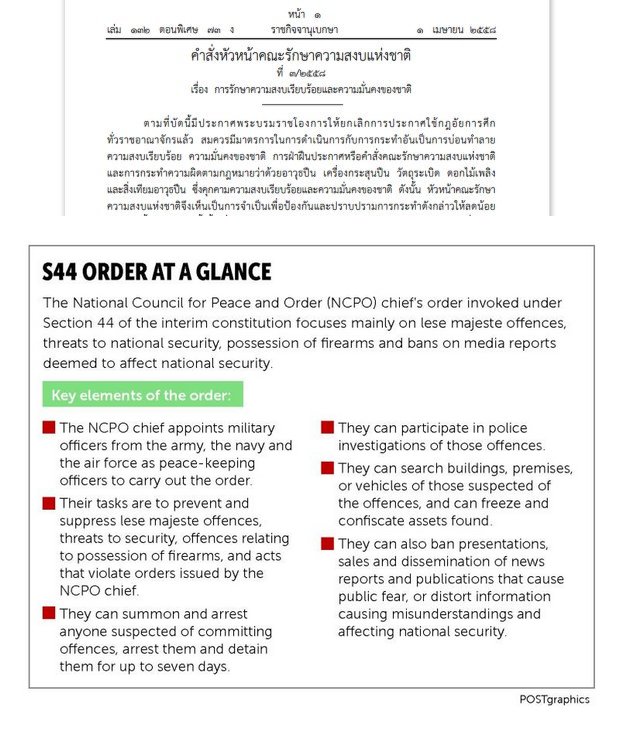