The White House's nomination of a new United States ambassador to Thailand shows America values its relations with the kingdom, said Maj Gen Werachon Sukondhapatipak, spokesman of the National Council for Peace and Order.

Former ambassador Kristie Kenney left her post in October to become deputy assistant secretary for public diplomacy and public affairs in the East Asian and Pacific affairs bureau in Washington. 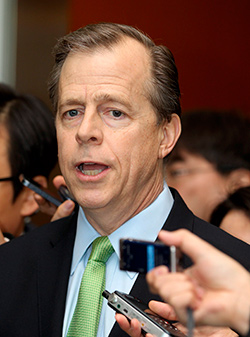 Glyn Davies, former US special representative for North Korea policy, talks to the media in Seoul, South Korea in this Janaury 2014 file photo. US President Barack Obama has nominated him as new ambassador to Thailand. (EPA photo)

Maj Gen Werachon said the naming of the new ambassador showed that bilateral relations remained unchanged, although he refused to state that the US "understood" the junta's role in Thailand.

He also said that US might not understand the Thai government's motives and positions on numerous issues, but it also had to find an appropriate figure to be its representative.

The US increasingly has pressured the junta to restore democracy and elections and criticised the impeachment of former prime minister Yingluck Shinawatra. Speculation was rife that the US would not name a new ambassador until democratic rule was restored.

But Maj Gen Werachon said US officials had told Thailand unofficially that a new envoy would be named. He also claimed the US had asked Thai authorities what characteristics and qualifications of the nominee would be suitable.

Although Thailand has cozied up to both China and Russia since the coup, Maj Gen Werachon said military ties with the US had hardly declined, as both countries continue to hold joint exercises and education programmes.

Since the coup, the US has, in fact, cancelled one full exercise and greatly scaled back another. It also cut off million in dollars in military aid.

He added that weapons procurement from the US remained the same.

Mr Davies is a career foreign service officer and most recently the special representative for North Korea policy at the US State Department. He was only the second person to hold that position.

Previously, he was the US ambassador to the International Atomic Energy Agency and is best known for his push for a return to the six-party denuclearisation talks between North Korea and China, Japan, Russia, South Korea, and the United States.

Observers say that with his knowledge of crisis diplomacy, he would be a good fit for the Thai posting, given the country's strained relationship with the US.

His confirmation, however, is anything but certain as the US Senate is controlled by Mr Obama's opponents who have pigeon-holed all of his recent nominations.

The Thai embassy in Japan has warned Thais not to carry cannabis, hemp and cannabis or hemp-based products into Japan or face punishment.