Loopholes in the draft charter provisions on political and voting systems are expected to dominate much of the National Reform Council (NRC) debate on the draft, which begins Monday.

He was speaking after the panel met Sunday to prepare for Monday's opening of the debate on the first draft of the new constitution.

The Constitution Drafting Committee on Friday handed the draft of the 315-section constitution to the NRC for deliberation.

Three magazines, one subject: The country's top news weeklies agree there is just one subject for the cover story. Siam Rath, Matichon and the Nation's political magazines focus strongly on the debate on the constitution. (Bangkok Post photo)

NRC members and the council's 18 reform panels will debate the draft section-by-section from Monday until next Sunday.

The provisions on the appointment of a non-elected outsider prime minister and the mixed-member proportional (MMP) representation voting system are expected to be the debate's highlights.

Mr Sombat also drew attention to a provision allowing the government to propose urgent legislative bills for the opposition to debate during parliament sessions.

The opposition must table a motion to debate the bills within 48 hours or the bill will be deemed as having passed through parliament and will become law.

Mr Sombat said this could be dangerous if the proposed bill features dictatorial content that gives the executive branch unlimited powers to run the country.

While the MMP system gives small parties the chance to win parliamentary seats through party-list elections, it may also contain one of the most serious loopholes.

In the past, the party-list ranking was decided by party leaders and core members and the party's main financiers often tended to be ranked high on the list, which gave them a better opportunity to be cabinet ministers.

However, the new party-list voting system - called an "open-list" - will allow voters to rank the candidates themselves.

There are concerns about a loophole in the proposed open-list where wealthy party-list candidates may still use money to lure voters to rank them high on the party list, Mr Sombat said.

Gen Akechai Sriwilas, spokesman of the political reform panel, said the heads of the NRC's 18 reform panels will get 30 minutes each to debate the draft, and the other members will be given 15-minute slots to have their say. 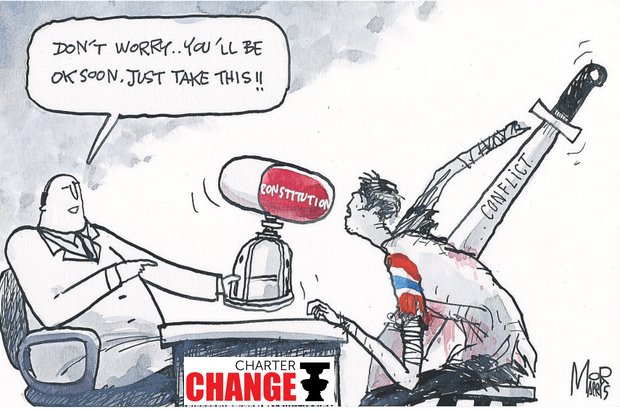