Yingluck pleads not guilty to all charges
Thailand
Politics

Yingluck pleads not guilty to all charges

Embattled former prime minister Yingluck Shinawatra entered pleas of not guilty to charges of dereliction of duty and abuse of authority in administering her government's controversial rice-pledging scheme when she appeared before the Supreme Court on Tuesday morning.

She was granted temporary release on the condition she does not leave the country without the court's permission.

Ms Yingluck, accompanied by her husband Anusorn Amornchat and her lawyers, arrived at the court at 8.45am on Tuesday. She had been ordered by the court's Criminal Division for Holders of Political Positions to appear at 9.30am to hear the charges and enter her pleas.

In the courtroom, a judge read out the charges against her.

The former prime minister is charged with dereliction of duty and abuse of authority in failing to stop graft and losses in the rice scheme under Section 157 of the Criminal Code and Section 123/1 of the 1999 Counter Corruption Act.

Losses estimated at more than 500 billion baht were incurred when her government bought rice from farmers at above-market prices and then failed to resell much of it.

After hearing the charges and entering pleas of not guilty, Ms Yingluck said she would submit a written defence statement to the court on July 3.

The court set July 21 and 28 for the first examination of evidence and witnesses. The court ordered Ms Yingluck to appear before the court at all hearings. If unable to attend she must submit a request with sound reasons. 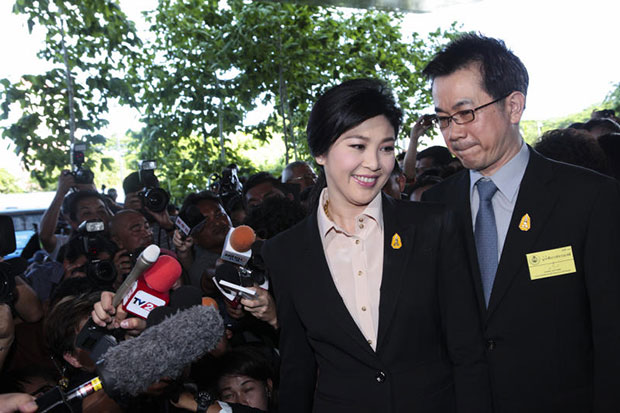 Former prime minister Yingluck Shinawatra and husband Anusorn Amornchat arrive at the Supreme Court's Criminal Division for Holders of Political Positions, where she entered pleas of not guilty to charges of dereliction of duty and abuse of authority in the controversial rice-pledging scheme, on Tuesday morning. (Photo by Patipat Janthong)

The court allowed her bail as requested but set the condition she must not leave the country without court permission.

More than 500 city police and plain-clothed officers were deployed at the court.