Property tax back on agenda

Finance Minister Sommai Phasee has won a backroom battle with the prime minister, and is bringing back his much-discussed land and buildings tax proposal.

The much-touted land and buildings tax is expected to be at the top of the cabinet's agenda over the next two months after a delay since March based on public concerns about burdensome taxation.

The draft bill on the new property tax is pending Finance Ministry consideration before seeking approval from the cabinet and the National Legislative Assembly (NLA), said Finance Minister Sommai Phasee.

Homeowners in cities are subject to the tax payment, but the rate should not be too much of a burden for them, he said. Houses owned by farmers in rural provinces are tax-exempt.

Earlier Prime Minister Prayut Chan-o-cha decided to shelve the bill, citing the economic slowdown and possible impact on low-income earners. The new property tax is a priority because tax revenue is desperately needed to finance multi-trillion-baht infrastructure investment as well as to help with the government's goal of narrowing economic disparity.

The government estimates the new tax will generate 200 billion baht a year in revenue. 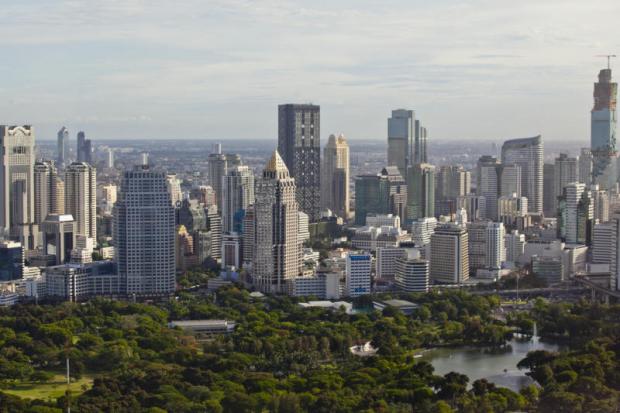 An aerial photo of Bangkok's high-rises. Thailand's new land and buildings tax is scheduled to go to the cabinet in the next two months. (Photo by Krit Promsaka na Sakolnakorn)

Based on the ministry's recent proposals, homeowners would be charged 0.1% of the appraised value of their homes. Land for agricultural and commercial use would be taxed at 0.05% and 0.2%.

Agricultural land appraised at less than 1.5 million baht would be tax-exempt, meaning farmers with 20-30 rai of land in remote areas would pay nothing.

The ministry plans to expand its tax revenue base to 20% of GDP in the future from 17%, said Mr Sommai.

In related news, the Finance Ministry plans to seek cabinet approval the next few weeks to extend the 7% value-added tax (VAT) another year, he said. The VAT is due to expire at the end of September. The ministry also aims to close loopholes on VAT evasion by authorising the Revenue Department to enforce tax invoice issuance, said Mr Sommai, with a fine or jail for violators.