A chance at the lottery now costs the official 80 baht almost everywhere, but a new problem has cropped up - buyers don't want the cheap tickets, and sales are down. (Photo by Krit Promsaka na Sakolnakorn)

While lottery ticket prices have been stabilised under government orders,  lottery sales have plummeted, vendors say.

Retail lottery vendors complain business for the June 16 draw — after the government demanded lottery tickets be sold at 80 baht a pair or vendors would face tough penalties — is quiet. Several have devised gimmicks to boost sales.

Supol Charuwutthipong, a vendor in Lampang, said he offered a packet of instant noodles to customers who bought three pairs of lottery tickets. The pitch worked, he said.

Mr Supol said he thought buyers would appreciate the lower price and that would make it easier for him to sell tickets, but things did not turn out that way.

"The business was better when the prices were higher. That is totally strange," he said. 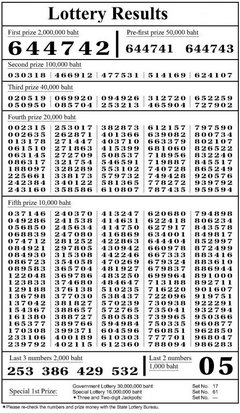 Results of the first lottery after prices stabilised. How did you do?

Mr Supol said the drop in ticket sales was partly due to scrapping the jackpot prize and in part due to a condition that lottery tickets must not be sold in bundles.

The two factors are believed to have reduced the chance of winning big prizes, Mr Supol said.

The jackpot system, which is the highest prize in the lottery, is the first prize plus the jackpot number which is separately drawn. The jackpot prize starts from 34 million baht.

Tickets sold in bundles were normally sold at high prices − 100 baht per pair or higher.

He was referring to the Government Lottery Office's plan to change its three-digit drawings to award prizes based on both the first and last sets of numbers in an effort to help vendors sell more tickets.

They said most lottery tickets are being sold by wholesalers who are forced to cut the price from 80 baht to 75 baht a pair to attract buyers.

In Nakhon Ratchasima, several lottery retailers said ticket sales had dropped by more than 50% despite the lower price.

Quoting their customers, the vendors claim the buyers are turned off by the "no-bundle" sale policy.

GLO spokesman Thanawat Pholwichai said the office has received complaints about overpriced lottery tickets for the June 16 draw but the number of complaints had fallen significantly.

Prime Minister Prayut Chan-o-cha said Tuesday the retail lottery price should be used to measure if the government's efforts to reform the industry are bearing fruit.

He said the government will figure out how to maintain the price in the long run as it moves to overhaul the entire system.