NCPO to ask reporters not to upset PM
Thailand
Politics

NCPO to ask reporters not to upset PM

The prime minister's team intends to order 200-plus foreign and Thai journalists to stop upsetting Gen Prayut and the cabinet with provocative questions. (Photo by Thiti Wannamontha)

The National Council for Peace and Order (NCPO) plans to gather over 200 local and foreign journalists next week to ask them not to upset Prime Minister Prayut Chan-o-cha and other cabinet ministers with provocative questions.

The meeting will be the largest media summons by the NCPO since the 2014 coup.

The meeting, between journalists, soldiers and police, will be held at the national police headquarters to urge reporters to ask "constructive questions" and not to "distort facts" in their reports, Lt Gen Suchart Pongput, commander of the Army's Signal Department, said.

Lt Gen Suchart, also secretary to a committee tracking media reports about the NCPO, said Gen Prayut monitors "every page and every column in every newspaper".

"There has been no order from any of my bosses, but it is my duty to build healthy relationships and mutual understanding with the media," he said, adding some past questions by reporters had caused confrontations between the army and the police or between certain cabinet ministers and senior officials.

"We just don't want such things to happen again. We want to meet the media regularly," Lt Gen Suchart said. He also said the NCPO and the media could meet in the form of sit-down discussions, over food or play sports.

A short-tempered Gen Prayut is often made furious by the questions of reporters at Government House. He has also been criticised for his conduct towards reporters after he threw a banana skin at journalists when they asked him to pose for a photo at a trade fair.

Lt Gen Suchart said he often calls editors who run inappropriate photos or stories to register his complaint directly without receiving an order from Gen Prayut.

The prime minister has maintained that TV stations or newspapers that "commit wrongdoings" must not be shut down, he said.

However, red-shirt PeaceTV was closed down though Gen Prayut claimed the move was carried out by the National Broadcasting and Telecommunications Commission. 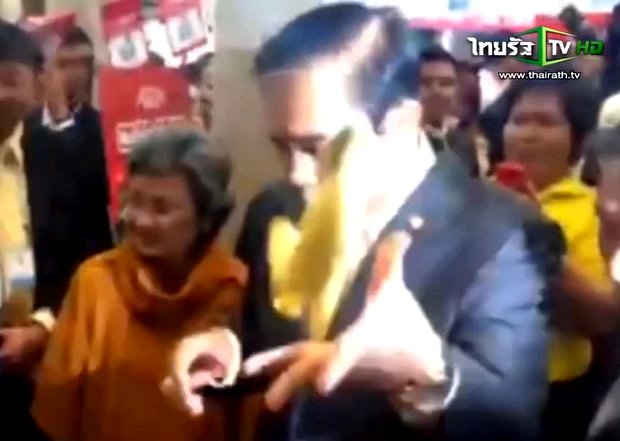 One of several low points in Gen Prayut's relations with the media came last Dec 23, when he tossed a banana peel at a photographer's head after being asked to face the camera one time too many. (Thairath TV screen capture)

At least 49 inmates die in Colombia prison riot and fire

BOGOTA: At least 49 inmates were killed and dozens more injured early Tuesday after a fire broke out during a prison riot in southwestern Colombia, the national prisons agency said.

The cabinet on Tuesday agreed to waive tariffs on child safety seats until the end of next year to allow more time to promote their use.