Hundreds join the Post Freedom activity at the BTS National Stadium skywalk on July 3, 2015 to urge the release of 14 students.(Photos by Patipat Junthong)

Hundreds of people on Friday evening covered a wall in central Bangkok with Post-it notes denouncing the military government and demanding the release of 14 jailed student activists.

The "Post Freedom" activity was staged by the anti-coup Resistant Citizen and New Democracy groups on the BTS Skywalk near the National Stadium station.

Participants wrote messages on colourful Post-it notes for their friends in jail and stuck them on the "Wall of Democracy" erected on the Skywalk near the Bangkok Art and Cultural Centre. Around half of the space on the skywalk was barricaded by police.

"Dictatorship must die. Democracy must thrive," read another, quoting the famous last words of Krong Chandawong, an MP-turned-political prisoner before he faced the firing squad without trial at the hands of Field Marshal Sarit Thanarat in Sawang Daen Din, Sakon Nakhon, 54 years ago.

"Thank you all. You're not alone," read another note.

The activity began at 6pm and ended peacefully at around 8pm.

The 14 students were arrested last Friday on charges of sedition and illegal assembly after they staged an anti-coup protest a day earlier.

Now in Bangkok Remand Prison, they said they were refusing to seek bail for two reasons. First, they did not accept the power seized illegitimately by the junta. Second, they said if they sought bail, they must accept some terms, one of which would be to stop their political activity and freedom of expression which they view are their right.

The junta maintained that the students broke the law and had to pay. It also continues to claim that students probably did not act entirely of their own free will but were backed by some "political" people whom it refused to name.

The junta has also urged other people to be patient and allow time for reforms to be carried out, saying it has no wish to stay in power longer than necessary.

The jailing of the students has been denounced by human rights organisations worldwide.

Prime Minister Prayut Chan-o-cha has said the government was exploring ways to hold talks with anti-coup student groups. No further details have emerged. 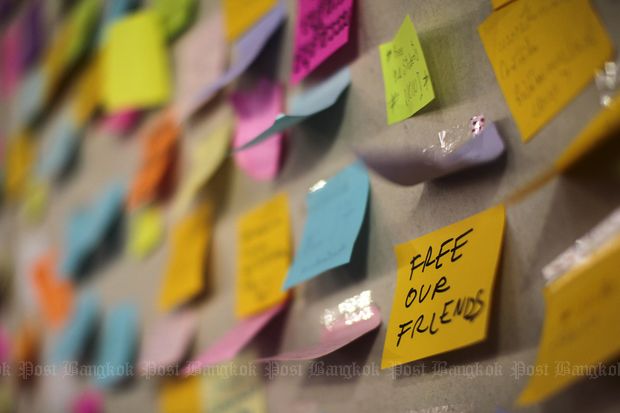