Prime Minister Prayut Chan-o-cha has invoked his special powers under Section 44 of the interim charter to tackle illegal street racing, alcohol sales near schools and universities, and illegal nightspot operations.

Bar and club operators slammed the harsh penalties imposed by the order, including a five-year ban on pubs allowing entry to people aged under 20, saying that tens of thousands of jobs could be lost.

The tough measures signed by Gen Prayut were published in the Royal Gazette Thursday, and were due to take immediate effect.

The move came after Justice Minister Gen Paiboon Koomchaya urged the premier last month to invoke his special powers to curb the problems.

In late May, police arrested more than 400 motorcycle racers on Ratchaphruek Road in Thon Buri district, in what is believed to be the country's biggest ever street racing bust. The mass arrests led to a round of public criticism of street racing, which the government pledged to tackle.

Under the new measures, public gatherings with the intention of conducting street racing are prohibited. 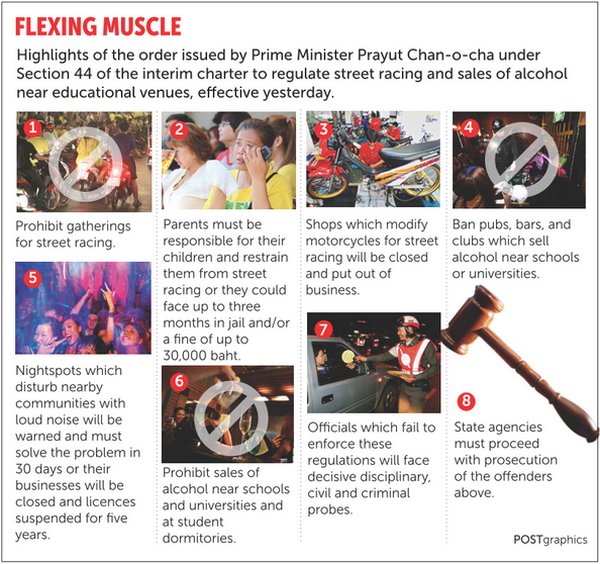 Police and officials are authorised to temporarily confiscate cars or motorcycles suspected of being used in street races, and arrest suspects.

Officials can also arrest those watching illegal races. Previously, police could only arrest street racers after they had started races.

Parents of juvenile street racers were urged to comply with the Child Protection Act and restrain their children.

If they fail to stop their children from repeatedly taking part in street racing, parents will face a maximum of three months in prison and a fine of up to 30,000 baht — the same penalties imposed under the act.

Gen Paiboon earlier said this law was rarely enforced against juvenile street racers as police felt sympathy for the parents and did not want to prosecute them.

The owners of shops which modify motorcycles which are involved in street racing will be regarded as assisting in illegal road activities and could face a maximum of six months in jail and a fine up to 20,000 baht.

The previous penalty was a three-month jail term and a fine of up to 10,000 baht.

Their businesses will also be temporarily shut down, or their licences revoked immediately.

Meanwhile, any pubs or nightclubs that allow entry to or sell alcohol to people aged under 20, or operate beyond their legal hours will have their licence revoked, or ordered shut for five years.

Bars, restaurants, and clubs also are banned from selling alcohol near schools, universities, and student accommodation.

If they breach the order they face being closed down and their alcohol sale licences permanently revoked.

The order did not specify what distance between the alcohol vendors and educational institutes was acceptable.

Last month the National Committee for Alcohol Consumption Control approved a ban on alcohol sales within 300m of educational institutes, while Gen Paiboon said the distance should be extended to 500 metres.

In addition, night entertainment venue operators who have complaints lodged against them for noise pollution by residents will be given 30 days to tackle the problem.

If they fail to do so, they will be closed down and their licence suspended for five years.

The latest Section 44 order combines current laws and regulations which authorities failed to enforce in the past.

Meanwhile, more than 80 alcohol outlet proprietors have called on Gen Prayut to review the order, claiming it has a wide impact on businesses and workers.

The group suggested the government should instead strictly enforce the existing law on alcohol outlets, such as age restrictions and operating hours.

Prommin Phiophet, owner of a liquor outlet near the University of the Thai Chamber of Commerce, said the measure will affect a large number of people.

"Currently, almost 100,000 people work for 2,000 liquor stores near universities nationwide. If these people lose their jobs, who will take responsibility for them?" Mr Prommin said.

The regulation will also affect taxi drivers and those who work for roadside restaurants and convenience stores selling alcohol, he said.

He said the government could also lose around 2 billion baht a year in tax revenue if liquor outlets lose their shop licences.

Mr Prommin said the alcohol outlets were being treated unfairly since the government did not conduct a survey on vendors before enforcing the law.

Meanwhile, Napatsarun Junyavijuck, proprietor of a liquor outlet near Rangsit University, said the prime minister's order will result in 35-40% of Bangkok being barred from selling alcohol.

Ms Napatsarun said key economic zones such as Siam Square near Chulalongkorn University, Asok area near Srinakharinwirot University, the Victory Monument, and tourist destinations in other provinces such as Nimmanhemin road in Chiang Mai, would be affected by the regulations.

The group also will compile the names of people who are affected by the new law through its Facebook page and submit a petition to the state appealing for reason.

Cambodia has invited Russian Foreign Minister Sergey Lavrov to annual Asean-related meetings slated for early August, with the decision likely to cause concern among the international community which has been split in its response to Moscow's invasion of Ukraine.

KYIV/KRAMATORSK, Ukraine: Former Russian President Dmitry Medvedev said attempts by the West to punish a nuclear power such as Russia for the war in Ukraine risked endangering humanity, as the near five-month conflict leaves cities in ruins and thousands homeless.

AIKON #tide Benzilla unveiled at the Opening of the Maurice Lacroix boutique in Bangkok on the 1st of July.

Blinken due in town for security talks