Cabinet reshuffle looks on the cards

PM coy on whether military men are safe

Prime Minister Prayut Chan-o-cha hinted on Friday at the possibility of a cabinet reshuffle for the first time after having tried previously to avoid the subject, admitting constant talk of a cabinet change is distracting him from his work. 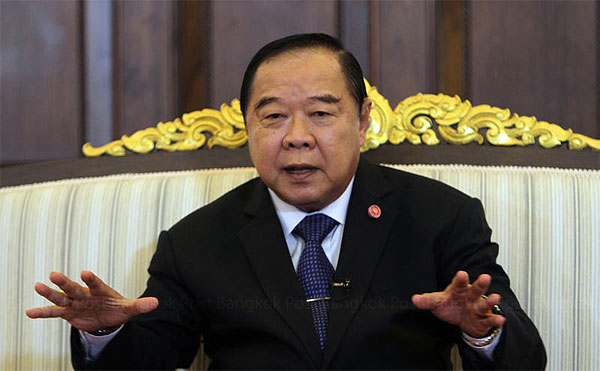 But he has insisted no more military officers will be brought into his cabinet should a reshuffle occur.

He did not clarify if current military ministers would be changed in the reshuffle.

Gen Prayut said he “is considering it” when he was asked to comment on the prospect of changes to the cabinet line-up.

“I want to be sure there won’t be any impacts. If there is a reshuffle, so be it. Talking about it every day will only make things worse and create conflict.”

“If I reshuffle the cabinet, the media will again suggest this is a conflict and that I do not listen to peoples’ voices,” he said.

His comment came amid mounting speculation of a cabinet reshuffle, particularly in the economic affairs section to restore public confidence in the government.

In a recent poll by the Research Institute of Bangkok University, a majority of respondents said a cabinet reshuffle would help improve the government’s performance and that Gen Prayut will have their support if he decides to reshuffle his cabinet, as respondents are losing confidence in the current one.

Responding to the poll result which suggested that the cabinet ministers handling economic affairs should be changed in the reshuffle, Gen Prayut said he did not think those ministers had done anything wrong.

“If a reshuffle does not improve things, then who will take the blame?” Gen Prayut said.

However, the premier said that if a cabinet reshuffle occurs, it would have nothing to do with the upcoming military reshuffle in September, which will see several senior military officers retire and new ones being promoted.

Gen Prayut said he has not entertained the idea of bringing in any retired or active armed forces leaders to join the cabinet, which already comprises several senior military officers.

Some observers have speculated previously that more military officers will enter cabinet as others retire and some civilian ministers are replaced.

Gen Prayut also brushed aside reports of a change of the deputy prime minister in charge of national security — the position now held by Gen Prawit Wongsuwon, who concurrently serves as defence minister.

Gen Prawit  said he was confident Gen Prayut will not remove him from the cabinet if there is a reshuffle.

“The prime minister will never dismiss me. He and I are like brothers. We will continue to work together until the country improves,” Gen Prawit said.

Gen Prawit said he has been on sick leave after he took a fall and hurt his arm and leg, which has been put in a splint. Doctors have advised him to rest for two weeks.

Gen Prawit’s absence from recent government meetings earlier spurred rumours that he might be among those members who would be taken out of the cabinet line-up.

Gen Prayut said he will assess the performance and efficiency of cabinet ministers and they should be given time to build up trust and confidence with the public.

The prime minister admitted that recent cabinet shake-up reports have distracted him from his work.

“He [MR Pridiyathorn] already said he is ready [for the reshuffle]. All cabinet ministers are gentlemen and they knew what they would face when they joined the cabinet. They can take it in their stride. But don’t make them lose morale.

“If a cabinet reshuffle is needed, let it be so. If cabinet ministers have to be changed, this is not because they are not good, but it is hoped the changes will help solve complex problems,” Gen Prayut said.

He said his cabinet ministers are still determined to carry on with their work. None of them have been discouraged nor have any tendered their resignations.

Gen Prayut said he has the final say on changes to a cabinet reshuffle, though appointing ministers involves finding qualified people for cabinet positions, checking their backgrounds, declaring their assets and seeking royal endorsement. “It is not that simple,” he said.

Regarding the conjecture over changes to the NCPO’s make-up, Gen Prayut said there was no need for any NCPO shake-up as the NCPO is not a cabinet.

“There will be only more appointments to the NCPO,” said Gen Prayut, who is also the leader of the council.

However, the prime minister should bring professionals in to join the cabinet, including those from major political parties.

He also opposed the premier keeping military ministers who perform poorly in the cabinet.