The Justice Ministry has resolved to strip the fugitive ex-premier of the right to use his old title of police lieutenant colonel - but it's not done yet. (Bangkok Post file photo)

Justice Minister Paiboon Koomchaya revealed the decision Tuesday after a two-hour meeting to discuss the matter with representatives from the Royal Thai Police (RTP), and the Council of State, which serves as the government's legal adviser.

Gen Paiboon said the decision was based on the fact that Thaksin is a criminal fugitive, one of the seven criteria needed to strip a police officer of his rank.

The Council of State ruled in 2011 that the criteria can apply to retired police officers, Gen Paiboon said. 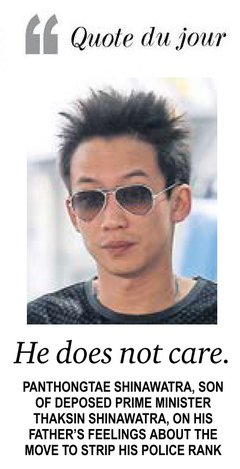 Thaksin left the police force before the Supreme Court's Criminal Division for Political Office-Holders sentenced him in absentia in 2008 to two years in prison for abuse of authority, in connection with the Ratchadaphisek land case.

Gen Paiboon said the RTP had previously revoked the ranks of 636 police officers based on the same criteria.

"Therefore, in Thaksin's case, there is no reason to make an exception," Gen Paiboon said.

After he was briefed on the decision Prime Minister Prayut Chan-o-cha said the next step will be for the Royal Thai Police to process the revocation of Thaksin's police rank and then send it for royal endorsement.

Thaksin's son Panthongtae Shinawatra wrote on his Facebook page Tuesday calling on the government to end the controversy over his father's rank.

"If removing his rank will help improve the country, just do it!!" he wrote.