The Erawan shrine opened to worshippers just two days after Monday's killer bomb attack, as the prime minister knocked back the theory Uighurs did it, and rejects an offer to help from London. (Photo by Patipat Janthong)

Prime Minister Prayut Chan-o-cha yesterday dismissed a police assumption that the deadly blast might have been an act of revenge by Chinese Muslim Uighurs, while declining an offer by the British government to assist in the investigation.

Gen Prayut also urged the bomber to turn himself in or else be killed by the mastermind of the attack, as national police chief Pol Gen Somyot Pumpunmuang offered a 1-million-baht reward for information.

The junta leader poured cold water on reports Uighur militants may have launched the attack in retaliation for Bangkok's decision to deport 109 Uighur refugees to China in July -- an act which drew international condemnation for forcing them to face persecution in the communist state.

"If they had done it, they would have come out and declared their responsibility by now. But it's been three days and there is no one claiming responsibility. If they come out now, I won't believe it is them," said the former army chief.

Gen Prayut also called on the media to avoid "digging" about the government's international policy on the Uighurs.

Local Muslims and human rights groups have accused the government of separating the Uighur families by sending the male migrants to China and the women and children to Turkey.

Thanking the international community for their condolences and moral support after the blast that killed 20 people and left 125 injured, the prime minister turned down an offer by UK Foreign Secretary Philip Hammond to assist "in the investigation of this abhorrent act".

"Do you want foreign countries to intervene in every issue? No country will do this. It is a breach of sovereignty.... There is no need to get outsiders involved. They are welcome to give advice, but they can't take part in the investigation because it happened in Thailand." 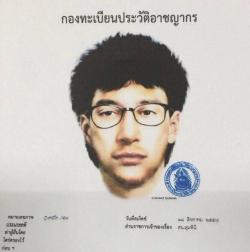 Authorities put out a sketch of the suspected bomber in Monday's blast.

One British national, a 19-year-old Hong Kong resident, lost her life in Monday's bombing, dubbed by Mr Hammond as a "callous act of violence against completely innocent and unsuspecting members of the public".

The Criminal Court yesterday approved an arrest warrant for a tall, bespectacled male with an oval face and fair complexion, on charges of conspiring to commit premeditated murder; conspiring to cause an explosion that killed or injured others and damaged property; and illegal possession of explosives.

He was wearing a yellow T-shirt and filmed by a CCTV camera at the bomb scene. A sketch of the man was also released by police yesterday.

"If you want to be safe, please come to see the authorities. We will assure your safety under the rule of law," Gen Prayut said. He believed the bomber may be murdered by his associates to assure their own safety.

Though Pol Gen Somyot said police had not ruled out any motives behind the bomb attack -- terrorism or domestic politics -- he personally believed that the perpetrators aimed to "discredit public confidence in the government".

"This incident was done on a large scale causing greater loss of life and property after past incidents failed to achieve their goal," he told reporters.

A motorcycle taxi driver believed to have taken the bomber away from the Erawan shrine told police that the man spoke to him in English, saying he wanted to go to Lumpini Park, a police source said.

Based on CCTV footage, the man was last seen at Sala Daeng intersection.

Meanwhile, officers yesterday retrieved a damaged steel pipe, believed to part of an explosive device tossed from Taksin Bridge to Sathon pier on Tuesday. It failed to hit its target and instead bounced, without causing any damage, into a canal connected with the Chao Phraya River.

In another development, Phongphop Butsari yesterday turned himself into police to clarify a Facebook message he posted which suggested violence would take place in Bangkok between Aug 14-18, under the name "Witchawet Phonphromraksa" last week. The man said he just copied the message from a political discussion page. He was not detained.

Chulalongkorn University international relations professor Surachart Bumrungsuk told the Bangkok Post the Thai government should have been more discreet before jumping to any conclusions about the bomb blast.

"Any foreign government facing such horrors would not offer a quick theory on who's behind it, but bring back confidence to the people and the international community for safety and justice," said Mr Surachart.

The government should be concise and clear in its statements and not try to lead public opinion or sentiments dubiously towards any political lines, he added.

Thailand was already being monitored by the international community following the deportation of the group of Uighur refugees, and should tread lightly when commenting, Mr Surachart said.

"Monday's bomb blast, despite several theories, should not overshadow the Thai government's decision to consider the Uighur matter on humanitarian grounds."

"It is too early to say who was or was not involved. It is important to wait for evidence and not rush to judgement," he said.