Analysis: Too early to rule out any motives
Thailand
General

Analysis: Too early to rule out any motives

Just a day after the arrest warrant was issued for a suspected "foreigner" bomber in the Erawan shrine blast case, the military junta said it remained confident the attack has no link to international terror networks.

"It seems like a conscious effort on the part of the government to present a certain narrative of what has happened," said Matthew Wheeler, Bangkok-based security analyst at the International Crisis Group.

From day one of the blast, senior government officials were constantly referring to suggestions it was related to domestic politics, with the prime minister referring to a possible red-shirt link. 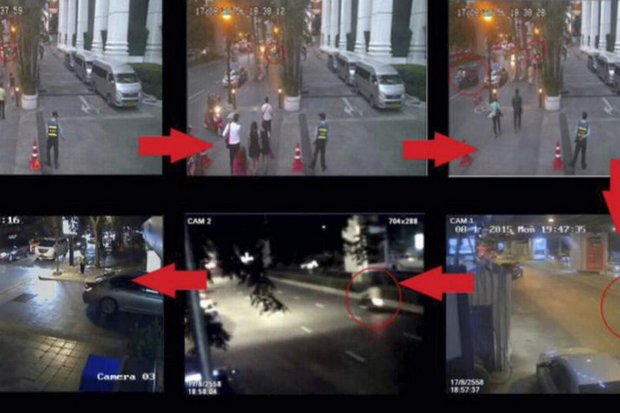 In this series of CCTV images released by police and reconstructed by the media, the presumed bomber in the yellow shirt hailed and took a tuk-tuk to the Erawan shrine on Monday evening. Authorities are under fire for trying to claim they know why the bomber acted - but really are just setting their own narrative. (Reuters/Royal Thai Police photo)

"It is interesting because it seems to contradict what senior officials have said -- that a suspect wearing a yellow T-shirt caught on security camera was a foreigner and that retaliation by the Uighurs may have been a motive. It is contradicting those earlier suggestions."

Others have suggested it is premature for the government to rule out any theories at all, given the lack of any hard evidence.

"Every hypothesis that has been presented has holes and inconsistencies that investigators and analysts are still unable to explain credibly," said Ambika Ahuja, Southeast Asia analyst at the political risk consultancy Eurasia Group.

Despite suggestions by Gen Prayut that anti-government groups might have had a hand in the attack, Ms Ambika said the timing was not right if their goal is to force an early election.

"This attack, if anything, would push elections further away and distract from the electoral roadmap," she said.

The theory that the damage was inflicted by a red-shirt protester was one of five scenarios, each carrying a possibility rating from "very low" to "moderately high", American security consultant Zachary Abuza writes.

Mr Abuza graded the domestic motive "moderate" as it would discredit the junta for being unable to provide security in the heart of Bangkok and devastate the already fragile economy.

But past attacks reveal red-shirt attacks are on a small scale, amateurish, and certainly do not inflict mass casualties.

"If you wanted to hurt the junta, this would do," he said, although he cautioned that such an attack would be "counter-productive to their cause and give the junta and their supporters greater cause to crack down and cling to power".

On the Uighur revenge theory -- the hypothesis which Thai police believe and the Chinese media suggest -- Mr Abuza ranks that "low" as he doesn't think the Muslim Chinese ethnic group has a network large and sophisticated enough to carry out such an attack.

"Uighurs do have a legitimate grievance against the junta. And there is clearly a growing radicalisation among them," he wrote. "But an attack like that would lose all public or international sympathy."

Flip-flopping on his earlier remarks, Gen Prayut said Thursday the Uighur revenge motive was one of the three theories the authorities had so far. On Wednesday he ruled out this police suggestion.

But Ms Ambika said patterns for politically-motivated terror attacks are not always uniform, and silence from the culprits does not rule out any agenda-driven political groups.

"Looking at the pattern of whether or not a group claims responsibility for an attack can potentially generate false signals," said Ms Ambika, who noted that many attacks in the Middle East and North Africa go unclaimed.

On whether southern Muslim insurgents may be to blame, Mr Abuza ranked this theory "moderately high". He and ICG's Mr Wheeler agreed there was evidence the militants had expanded their work beyond the four southernmost provinces.

The April car bomb attack at the underground parking area of the Central Festival Shopping Mall on Koh Samui in which several people were injured was initially blamed by the ruling junta on the "old power clique".

But a police investigation led to the arrest of two Thai Muslim suspects on charges of terrorism and attempted murder. Another was killed while on the run and there are warrants out for six others.

Although the bomb set off at the Erawan shrine, an improvised explosive device made of galvanised steel pipe with ball bearings inside and lids on both ends, was different from IEDs commonly used in the Muslim South, the southern insurgents have the ability to make "fairly sophisticated IEDs inflicting mass casualties", said Mr Abuza.

"The junta wants it not to be southern insurgents, because if it is, then they have to do something about it," said Mr Abuza, the author of Conspiracy of Silence: The Insurgency in Southern Thailand.

"There is palpable frustration with the peace process and lack of government will, especially with the military's hold on power extended to 2017. They know they have to escalate violence or else the junta will never negotiate in a serious manner."

But such an attack would lead to a major crackdown by security forces and cause the movement to lose the "little international support or sympathy it enjoys", he said.

Mr Abuza also ranked the Islamic State (IS) theory as "moderately high" as IS has "plenty of people in Bangkok who live in the shadows that it could draw on".

But it is not known to have operating cells in Thailand.

Eurasia's Ms Ambika would also not rule out the probability of a revenge attack by those in the armed forces who have been sidelined in recent years and in the upcoming reshuffle.

"The incident highlights the fragility of peace in Bangkok and will increase the stakes for the army government." 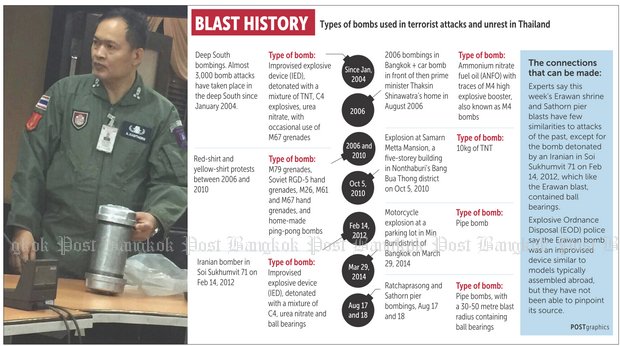