The government is vowing to ratchet up patrols to provide security and is moving to assure foreigners that travel to Thailand is safe.

The regime is preparing to issue a statement to the international community today, even as police admit their probe into the Erawan shrine blast has been retarded by a lack of modern equipment.

According to the statement as read to the foreign media on Sunday by Maj Gen Sansern, "You will be safe during your stay in Thailand and you will also experience friendliness, smiles and kindness that we always provide." 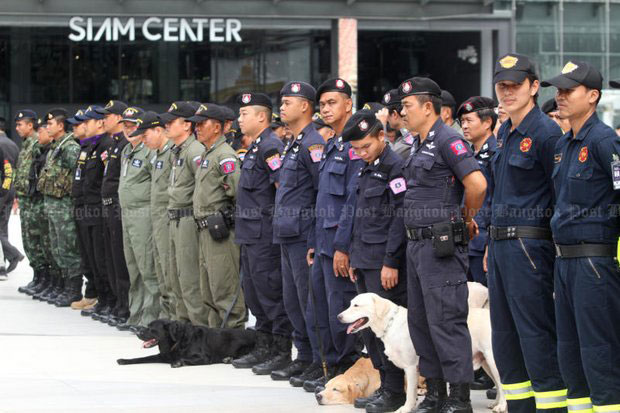 A statement to the world in the name of Thailand pledges that everything is currently under control, and more security forces will be poured into tourist areas to keep it that way. (Photo by Pattarapong Chatpattarasill)

The blast at the Erawan shrine in the Ratchaprasong area last Monday killed 20 people and wounded 130. Fourteen of the dead and many of the wounded were foreigners.

Another bomb went off at the Sathon pier on the following day, but no one was harmed.

"The government wants to assure everyone the situation is under control," the statement says.

"There will be reinforcement of both uniformed and plain clothes officers providing security in every spot to ensure optimum safety."

The administration is also relaying a message to foreigners planning to visit Thailand, saying: "The government wants all of you have confidence that you will be safe during your stay in Thailand."

The statement will be translated by the Foreign Ministry and distributed to Thai embassies overseas, said Maj Gen Sansern. It comes after 23 countries and territories last week issued advisories about travel to Thailand.

Tourism and Sports Minister Kobkarn Wattanavrangkul said she was concerned about tourism prospects for the rest of the year following the blast.

Tourism is seen as the only growth engine boosting the Thai economy at a time of slumping exports. Last year, it contributed 16% of the country's GDP of 12 trillion baht.

He said the relatives of 14 foreigners and two Thais, killed in the shrine explosion, had received financial assistance from the Justice Ministry and the Tourism and Sports Ministry.

A total of 100 requests for financial assistance have been lodged and the government will speed up payments, Col Winthai said. Fifty-two people remained in hospital Sunday, he added.