Prime Minister Prayut Chan-o-cha wants to use his special powers to prohibit people from using the word rakya (grassroots) to refer to the poor, because he believes the term creates class divisions in society.

Several hours after the comments, Gen Prayut's office insisted it was a joke, and even criticised media outlets for printing the premier's comments.

"I want to ask your permission to use Section 44 of the interim charter to bar anyone in this country calling this group rakya," Gen Prayut told a seminar held by the National Reform Council (NRC) panel on education reform and human resources development. 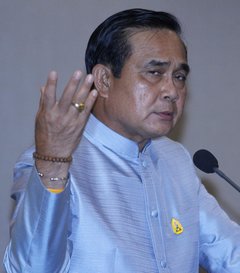 The prime minister is invoking Section 44 for a national ban on the word rakya, or grassroots because it's divisive.

"Call them 'low-income' or 'people with little education'. We have to lift their level up for the sake of equality. Today we do not have class divisions in society. No amart [elite], no nothing."

Amart was the rallying cry of former prime minister Thaksin Shinawatra and the red-shirt leaders who branded the country's elite clique as the major obstacle to true democracy in Thailand.

"The amart are civil servants who are representatives of His Majesty the King in looking after the people," Gen Prayut said.

Government spokesman Sansern Kaewkamnerd late Wednesday "clarified" that people should be able to tell when the prime minister is joking.

"People who listened to the prime minister knew that his intention was to make fun, a joke or gag," said Maj Gen Sansern. "The media should carefully consider the overall context to avoid misinterpretation. Not having a sense of humour can create misunderstanding, and the media will lose credibility."