The government's bid to seek financial compensation from former prime minister Yingluck Shinawatra and former state officials implicated in the multi-billion baht rice-pledging scandal should be ready to go to trial by late this year or early next year, Deputy Prime Minister Wissanu Krea-ngam said Thursday.

Two panels have been set up to determine if the suspects can be held liable to repay state losses, and how much the amount should be, according to Mr Wissanu.

The government will press charges by the end of this year, or no later than early 2016, he said. 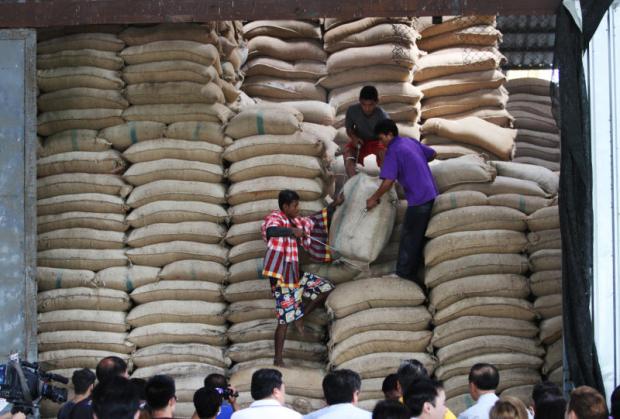 Workers remove a sack of rice from a stockpile due for inspection at the Arunsil Central warehouse in Nakhon Pathom's Muang district Thursday. Department of Foreign Trade officials later uncovered rotten rice at the warehouse after local residents complained about an increasing number of weevils. Tawatchai Kemgumnerd

He was commenting on the case after National Legislative Assembly member Kittisak Rattanawaraha, speaking during the NLA s hearing on Thursday, asked him for a progress report.

The rice-pledging scheme launched by the Yingluck administration created substantial losses for the state and caused at least 17 rice farmers to commit suicide, said Mr Kittisak.

The case's statute of limitations -- a law prohibiting prosecution after a certain period of time -- will expire in February 2017. Prosecutors had two years to prove their case.

Mr Wissanu said if Ms Yingluck and the six former Commerce Ministry officials implicated in the case are found guilty, they will have to pay compensation to the state.

The state's losses resulting from the scheme are estimated to be over 530 billion baht.

The suspects are being tried in three separate groups -- Ms Yingluck, six ministry officials and non-state sector suspects -- each of which faces different charges, said Mr Wissanu, without confirming the number of non-official defendants.

Though only Ms Yingluck and the ministry officials are targeted to repay financial losses, the non-state sector suspects are also being sued for the role they played.

The suspects will still have the right to appeal and the appeal process won't affect the statute of limitations, he said.