So-called crisis panel only one reason draft charter was rejected, as some want jobs in new oversight regime.

Suspicions have emerged that certain members of the National Reform Council shot down the draft charter in the hope they would be chosen for a new reform steering body to be appointed by the prime minister.

The NRC's rejection of the draft Sunday by 135-105 votes with seven abstentions effectively pushes back the elections to about April 2017.

NRC members with close ties to the military lobbied heavily to reject the draft that contained the controversial "crisis panel" that would allow a 23-man body to take over executive and legislative powers from an elected government if a national crisis emerged. 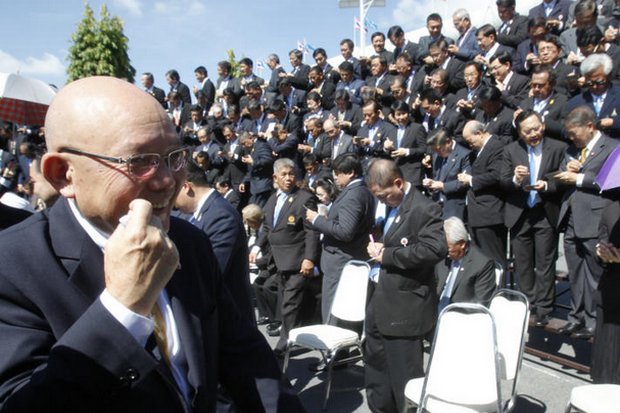 President Thienchay Kiranandana organised one final photo op for his National Reform Council before it went out of business, with evidence surfacing that rejection of the draft charter was all about job security. (Photo by Pattarapong Chatpattarasill)

The vote has brought about the end of the NRC. But the National Reform Steering Assembly (NRSA) will be established within 30 days to replace the NRC.

The steering assembly will comprise 200 members appointed by Prime Minister Prayut Chan-o-cha. The role of that assembly is to advise the prime minister on national reforms.

About 100 members of the steering assembly will come from among former NRC members.

This effectively means the government will chart the direction of reforms as a new charter drafting body comprising 21 members starts work on a new draft. NRC members who voted in support of the draft said their colleagues who voted against the draft charter did not do so because they were opposed to provisions deemed undemocratic like the crisis panel.

Over the past two weeks, Gen Prayut had voiced support for the so-called crisis intervention panel, saying the panel is needed to prevent a crisis during a transition to full democracy.

Supporters of the draft and the CDC members were dismayed that Gen Prayut did not do enough to stop military-aligned members from campaigning against the draft.

Gen Prayut had insisted that he would not intervene in the vote on the draft and that all NRC members were free to vote as they saw fit. "From now on, nobody will dare work with the NRC,'' said the former member said.

With the draft charter rejected, the National Council for Peace and Order will now appoint a new charter drafting committee.

The committee has six months to come up with a draft, by March next year.

This new draft, without further screening, will be put to a referendum by July next year. If this draft passes the referendum, another six months will be needed to draft organic laws. This means elections will be held three months later, around April 2017.

Paiboon Nititawan, a former CDC member, said he voted in support of the draft, but he accepted the rejection of the draft as its opponents were entitled to their opinions.

Mr Paiboon said the vote against the draft means the majority of the NRC did not want the country to get trapped in a fresh round of conflict from the draft charter, given strong resistance to the draft ahead of the vote.

He said if the NRC had approved the draft, political turmoil would probably have ensued, hindering government efforts to tackle the economy.

"I believe the government did not want to put country at risk of sustained political conflict during the lead-up to a referendum as this would cause the government's popularity to decline and the draft charter would likely lose the people's support,'' Mr Paiboon said. 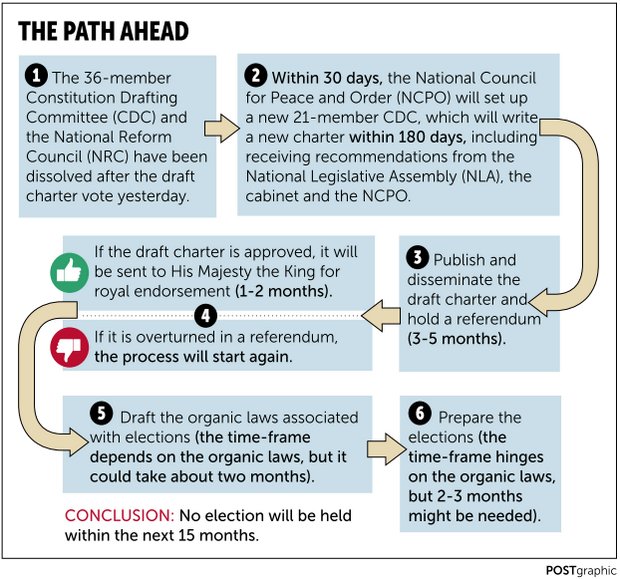