Nakharin Mektrairat, one of the 36 writers of the scrapped constitution draft, has been selected as a Constitutional Court judge.

A three-member screening committee voted 2-1 to choose him out of 10 applicants, one of whom had been disqualified. 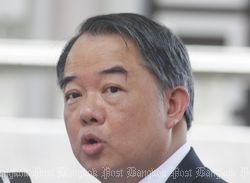 Mr Nakharin was chosen by a committee in a 2-1 vote on Friday. (Bangkok Post photo)

Mr Nakharin, also a vice-rector of Thammasat University, will replace Chalermpon Ake-uru, who retires at 70.

The seat on the court is reserved for a specialist in political science, public administration or other fields of social science.

Ten people applied for the position and the screening committee spent one hour to make the decision.

The Constitutional Court, one of the most powerful institutions in the country, has nine judges serving nine-year terms. All are appointed by courts and senators under the now-defunct 2007 charter.