Police look on as anti-coup rally goes ahead
Thailand
Politics

Police look on as anti-coup rally goes ahead

A protester holds a sign reading "Nine years after the Sept 19 coup. Let's declare liberty and step over dictatorial power" during the rally at the Democracy Monument on Saturday. (Photos by Patipat Janthong)

Hundreds of anti-coup activists rallied at Democracy Monument on Saturday evening after defying an order not to march there, but police made no attempt to break up the event.

Security officials earlier tried unsuccessfully to put the brakes on the protest after a seminar marking the ninth anniversary of the 2006 military coup. They said the group had not sought prior permission to move as required by the new public assembly law.

Lines of police stood by as a crowds of people chanting "no dictatorship", some carrying anti-junta banners, marched peacefully to the monument. There was no uniformed military presence at the rally.

The march and rally took place following a seminar held by the New Democracy Movement at Thammasat University's Tha Prachan campus in Bangkok. Around 200 people attended the event.

Nine years ago, then army chief Gen Sonthi Boonyaratglin staged a coup to topple the then Thaksin Shinawatra government on Sept 19. 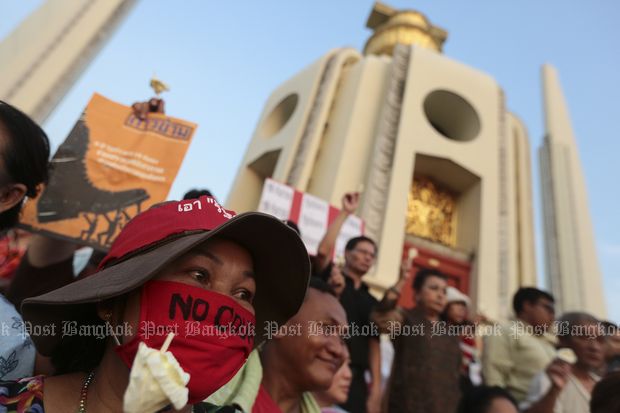 A woman holds a "dokmai chan" in memory of the coup nine years earlier.

At the seminar, Pichit Likitkijsomboon, a Thammasat economics lecturer, said a country that managed to resolve conflicts between old and new powers would prosper.

"But those which fail to do so will become developing countries like those in Latin America," he said.

A country can grow only when it is an open society where people can think and ask questions, he said. Only through questioning and the resolution of conflicts can it flourish economically and socially, he added.

"We have seen this transformation in a number of Asian countries. South Korea ended its political problems and got rid of military dictatorial rule and 20 years later, it is where it is today," he said.

"Japan, after losing World War II, also became a civic society and put an end to authoritarianism. Taiwan also flourished after it resolved its internal conflicts.

"Malaysia, where per capita income is now triple that of Thailand, also made an effort to resolve differences. China, which started out socialist and communist, eventually embraced a market economy in order to survive."

Mr Pichit said the Thai economy was at a dead end. Political institutions had to adjust and move away from centralisation to democratic capitalism, he said.

"Nine years and two coups later and we're still stuck, with no light at the end of the tunnel," he said.

"We can't even hold this seminar at the room we booked earlier even though I insisted the content was academic and not a political debate."

Mr Pichit referred to an earlier incident in which some 50 policemen and soldiers banned the group from holding the talk in the room it had booked, forcing them to move to another building.

At this point, Pol Col Attavich Sasueb, a deputy Bangkok police chief in charge of the area, interrupted the seminar and told the participants they could not walk to Democracy Monument as planned because it was against the law.

After the seminar ended at 3.30pm, the participants decided to disobey the instruction. Officials tried to change their minds by asking to search their belongings one by one but they made no objections.

They gathered at 4.30pm and began to march to the monument on Ratchadamnoen Nok Road. They reached the site at 5pm and since they caused a traffic jam, officials had to lift the barriers they had earlier put around the monument.

The group then staged symbolic activities, such as placing dokmai chan (paper flowers that guests at funerals burn) "in memory of dictatorship".

Dozens of police officers looked on and made no move to interfere with the event.

The demonstrators said they would continue their activities until 10pm as planned.

"Peoples' rights have been taken away, too many have been detained," said Montra Thongsuksan, a demonstrator carrying a sign saying "return power to the people".

"I have to show solidarity, against the military. I'm scared, but I'm willing to march to show we won't give up." Participants hold a banner reading "Long live the people. Down with dictatorship".