NEW YORK - The military regime and the government brushed off anti-coup protests at the United Nations in New York Sunday, saying the move would not cast Prime Minister Prayut Chan-o-cha in a bad light or undermine him at the summit.

Col Winthai Suvaree, spokesman of the National Council for Peace and Order (NCPO), said the prime minister's visit was not ruined by the anti-coup protests and he received a warm welcome from his supporters in the US.

He pointed out that demonstrations at the UN General Assembly were common and the protests against the Thai leader were unlikely to attract special attention or damage the country's image. 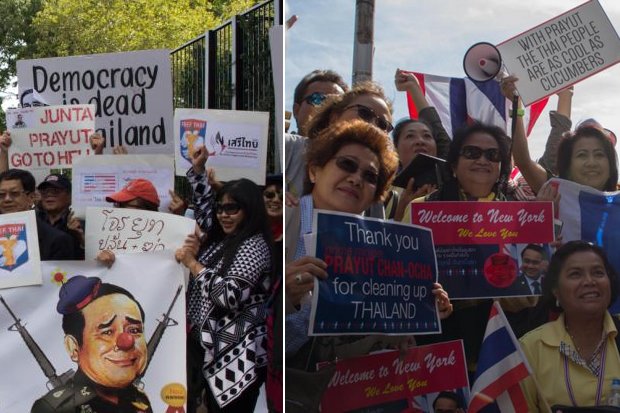 Two distinct crowds of Thai expatiates went to the United Nations building on Sunday, with government spokesmen in Bangkok praising one and dismissing the other. (Photos by Kanyakrit Vongkiatkajorn)

The G77 is a loose coalition of developing nations, designed to promote its members' collective economic interests and create an enhanced joint negotiating capacity in the UN. There were 77 founding members of the organization, but by November 2013 the organisation had since expanded to 134 member countries. 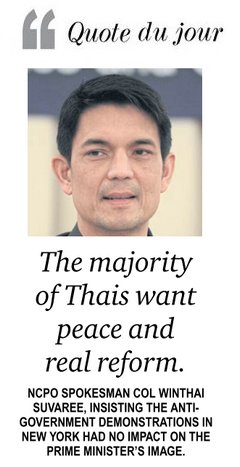 Gen Prayut arrived in New York last week to attend the United Nations General Assembly. The highlight of his trip will be an address to the assembly on Wednesday at 6am Thai time.

Without contribution from the Thai public, the government's efforts alone could not achieve this, he said.

"Foreign countries understand now that we do have problems and we want to solve them. They also have confidence the government will do its best and take the country toward democracy," Maj Gen Sansern quoted the prime minister as saying.

About 100 Thais demonstrated in front of UN Headquarters on Saturday as Prime Minister Prayut Chan-ocha made his first appearance at the UN General Assembly in New York.

"We love you Prayut!" yelled supporters in yellow shirts on one side. "Prayut get out!" yelled detractors on the other. The rival groups were separated by protesters from other countries. Each side had about 50 to 60 supporters from across the United States.

"I feel like Thailand has become so much more peaceful since Gen Prayut has been in power," said Wanida Sreewarom, who took a flight from Los Angeles and arrived in New York at 6am that day. "I've sacrificed my time and work to be here so I can show that I support him, especially when I heard that others were protesting against him."

"Our past governments have had so much corruption and we want to move forward," said Atrisak Jesdanun, 78. "We want reform and we want Gen Prayut to reform the constitution."

"He is someone who works hard and is committed to Thailand. What he is doing is necessary for the country," said Tanya Pramongkit, a 47-year-old graphic designer from Chantaburi.

Red-shirt protesters called for a return to democracy and an end to Section 44 and Section 112, known as the lese majeste law.  "I'm disappointed that Thailand is not a democracy," said Darunee Kitboonyalai, a red-shirt activist who says she fled the country after being charged with lese majeste. "We don't have fundamental rights in Thailand. I love the King, but why can't we have a democracy?"

"I feel like there are so many people who want to express themselves in Thailand, but can't," said Chutiphong Pipoppinyo, a 26 year-old who flew in from San Francisco.

He says he rounded up messages from his friends, many of them university students involved in activism in Bangkok, to share at the protest. "I'm here so Prayut knows what my friends and I have to say."

Patcha Boonkerd, a 27-year-old studying in New York, came to the protests after seeing messages posted on Facebook.

"I just want a government that we have actually voted for," said Ms Patcha, who is from Ayuttaya and is studying in New York. "I can accept it if someone says that we're not ready for a democracy, but I can't accept that the current government is pretending and saying that we live in a democracy."

He said that besides climate change, another pressing challenge is inequality. It is the root cause of such problems as poverty, conflict over resources, and irregular migration -- problems which may in turn spawn violence.

To address inequality, effective laws are needed. The government has passed a number of laws on the protection of the homeless, gender equality, and promoting equitable access to resources and public services, he said.

Similar support is also extended to non-citizens. The government offers social and legal protection to unskilled migrant workers. Last year alone, over 1.6 million migrants were registered and regularised for employment to protect them from human rights abuses and human trafficking. 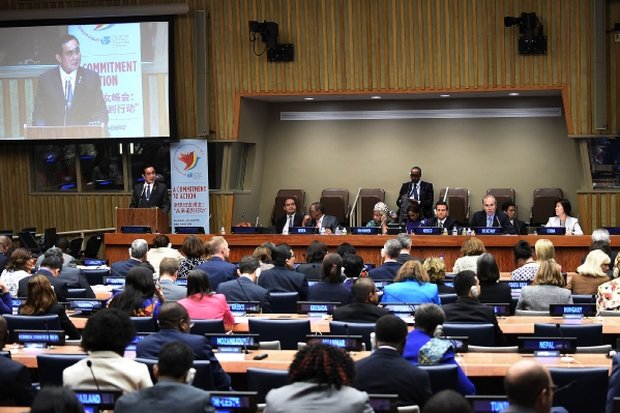 Prime Minister Prayut Chan-o-cha spoke Sunday at the Global Leaders' Meeting on Gender Equality and Women's Empowerment: A Commitment to Action. Spokesmen in Bangkok cited the speech as proof that the military regime is accepted by the world. (Photo courtesy of Government House) 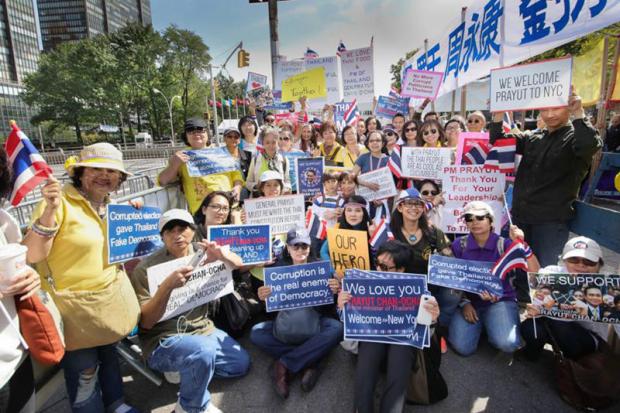 Supporters of Prime Minister Prayut Chan-o-cha hold banners welcoming the premier to New York. They have been rallying at the UN since Saturday and today will be their last day. Photo from PDRC New York's Facebook